By Navin April 16, 2007
It's the most hyped, much expected, latest incarnation of Grand Theft Auto Series Which has not released yet. This game is being developed by Rockstar Games and according to them, it's scheduled to be released by the end of this year,2007(precisely on October,2007 for XBOX360 and PS3). They started this series from Top view to third-person type free mode off run gaming. Personally, i quit playing Grand Theft Auto first part, because, the TOP view(or sometime it's called Bird View) really sucked. But after Grand Theft Auto(GTA III) 3, i changed my mind. Even more, after i played as a character called CJ(carl johnson, if i'm not wrong) in San Andreas, i'm much into it. This game is damn addictive and could give anyone an excellent gaming experience. My verdict, if to give, it's the collection of every individual game one could experience. I can drive vehicles, fly planes/copters, ride motorbikes, play pool, ride boat, everything.. for fun part( i say),there are lots of gang wars, looting,beatings,robbings,vandalizing are there. Players are committed to do these totally insane and socially immoral act in the game for fun sake. I did that too. It's just fun. 'Hot Coffee' mod in GTA San Andreas was the most debated aspect of the game, as it exposed nudity to players. Considering all kinds of audiences, country like Australia banned the release of GTA San Andreas. At first i didn't like banning of games but once i applied the mod and played the San Andreas, i think it's somewhat vulgar and indescent for underage players. I will never ever forget this game, this game was one of kind. Now, there is yet another release of this fine series to come, " GTA IV ".

I've come to know from various sources that GTA IV has no planes or anything flying machine to take control of as i did in previous GTA. The reason is that some player may enact 9/11. Sadly, i'm not aware of it's release for PC version. Like GTA Liberty City(sorry if i mispelled name of the game) whose PC port has not been released, there is no word for GTA IV for PC. Technically, it uses RAGE engine which would give fine character animation. In-game content are much detailed and fabricated that previous series. I also learnt that this game mimics the New York city but the equivalent portrait or city's name are different than in real. May be to escape lots of legal issues. 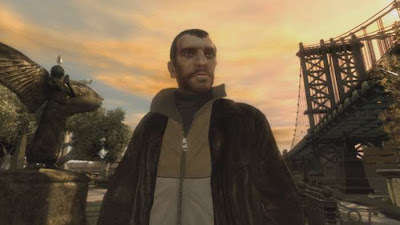 And, this time, 'Niko Bellic' is a main character in this upcoming adrenaline game. I know nothing about this character but seems like this guy is set for lots of killing and fun.

For trailer of GTA IV, http://rockstargames.com/IV/trailer_splash.html