By Navin April 17, 2007
Yesterday(April 16,2007), i was watching news channel. Suddenly, i was shocked to see Richard Gere forcibly handling Shilpa Shetty and kissed on her cheek. At first, it felt, 'what the heck' but the nuisance Indian News channel, they kept repeating the same scene on and on. Needless to say,Richard Gere is veteran Hollywood actor and Shilpa Shetty, the most scandalous indian actress. Her popularity rose after the 'Big Brother' show Scandal. Now, this Richard kissing Shilpa has become another mischievous scandal. 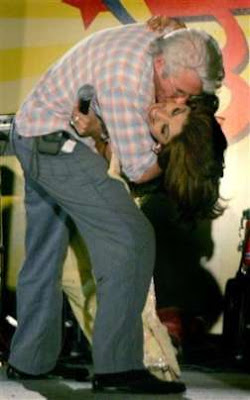 Richard kissing Shilpa
They were on some sort of AIDS awareness Event. It's apparent, the funding to help victims was brought with the help of Richard Gere. May be that's reason of his presense their. And Shilpa let him kiss her. It was friendly kiss. Not even a french kiss. But there were already the agitation across the roads, protesting the act, burning both Shilpa and Richards effigies. Those people were protesting just because Richard kissed Shilpa publicly. They consider it's insult to Hindu culture and immoral act. I don't think so. Don't they have any other work to do except making protest on things like this?

Personally i never liked and never watched a single movie of Shilpa but things like this is just making her even more popular,publicity for free. Good for her, and good for sophisticated Indian News channel for pumping peoples blood to outrage by showing same scene again and again.

By the way, my mind wanders and ask question" why people protest so illogically?" sometimes, i feel they are just a bunch of mindless group of monsters. They need to think and act differently.

Navin said…
one thing, i never understood, why Richard Gere had to forcibly kiss her. and besides, why did Shilpa acted so weird?? ha ha ha.. may be it's their part of act to get free publicity.. till date, even those who never knew who the hell is richard, now know all about him esp. in India..
April 18, 2007 at 11:23 PM