The Best Antivirus in the world

NOD32 is the best heuristic antivirus software for windows which takes very low resources and it's extremely efficient than any other Antivirus i've used so far. Being on-demand scanner, it's real time protection works under four different modes:

EMON(Email Monitor): monitors any incoming and outgoing emails from client

IMON(Internet Monitor): monitors most open port of TCP and it's best suited while being online. 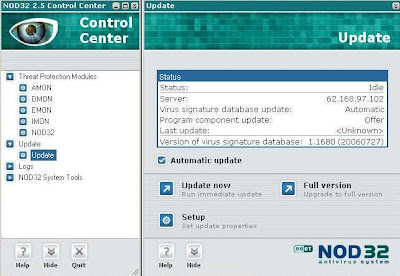 If you've any query,mail me at navinyolmo@gmail.com
Posted by Navin at Monday, May 07, 2007

And I thought that avast antivirus is the best one.

well, when i first used, it was F-Prot Dos version.. I thought it was the best.

Later, i used Mcafee Win32 version, i thought it was the best

Later, i used Norton Antivirus, i thought it was the best but it ate my system memory a lot

Later, i used AVG and this was better than all since it was faster and more efficient.

Now, NOD32 is above all that. It's superior to all antivirus i've used so far. It's update get released everyhour.

I've a virtual box setup within my old PC, there i put all the virus from old CDs and i tested with NOD32 with very old definition and it not only quarantined it, but deleted too. Besides, it checked every emails incoming/outgoing. I sent an email with virus attachment(i had difficult sending it from hotmail) and i used other mail server for testing and as soon as i received that file, attachment got already deleted. Thanks to NOD32. Others are not that efficient yet.

Now, my this new box, i've not setup virtual box here. will do someday and test more of a things.

Avast must be good. I've heard of it but i can't install more than one antivirus on one system. May conflict. :)

NOD32 screwed up my DNS settings and it did the same to one of my friend's computer. And sadly I'm not able to fix it :(. My friend formatted his harddisk and got the job done but I've too many not-reinstallable programs that i can't affort to loose to do that.

that's strange binay.. i never had that sort of problems..

Avast is good consedring it lightness ........ avast is the least resource hungry antivirus i have used so far

well with nod32 you have to get dirty(u have to crack it).Which is not the case with avast anti virus.
I have been a avid fan of this avast thing.You won't believe me but i have not had a single virus infection(unintensional!!!) ever since i got hold of this. but the problem is that a delebrately infect myself again and again just for the fun you know.

Sulav, i shouldn't be blindly advocating NOD32 only.
Sulav, you may be right,
And, how do you infect your system? may be under some virtual OS right?? anyway, thanks for dropping by some words dude

you know www.virustotal.com right if not you should know it is the ultimate antivirus comparision site .i love it. And no i don't use virtual os.I infect my computer
without them.i have always been able to remove'em manually afterwards.

ha ha don't flatter me.but one thing i have to admit remember one time i had asked abt tool to reveal xp password? I was just testing you sorry. i have one. i used to use it at the college to get to my colleges computer. And u know what one time i helped the administrator to get the password right that is a very funny story. he was like what!!!!!!!!!!! no one can decrypt SAM!!! poor he. the password he had set was "administartor" and all the time he was typing "administrator"(it was his mistake totally) he was about to crack. He was sweating.I could not see his misery.

yeap, XP is almost crackable though harder than Windows 98. ehe he e do we have password protection in windows98? i don't remember .. anyway bro, i've this tool in bootable cd, which i used many years ago to crack XP password to null. now, since i've not used it much, it's kindda rusty for me to remember all the steps. my point is, it's damn easy to crack XP passwords. i've seen some guys doing format/reinstall just because they forgot some XP admin password. .. i wish they could read us. :) or may be they've already figured that out.
You are indeed a geek inside :)

I have tried both Avira Antivir and NOD32. Both are equally good but the memory usage for NOD is a little high. You can open your the task manager and see.

The memory usage for the 'nod32krn' process would be around 22000 KB while the 'avguard' requires just around 6400 KB in my system. You can try it on you computer as well. But don't install both the antivirus at the same time.

And just like Sulav said you don't have to crack Avira Antivir.

I think NOD32 is very light on system. It eats only about 1400K on my system.
check it out
on this following link:
http://www.tibetan-mask.com/bloggercontent/nodmemusage.jpg
(note, firefox, won't show all link, please use IE. hehe)

i am a AVG fan though

What you have shown in the screen shot is only the nod32kui.exe. As far as I know, NOD32 has two processes running nod32kui.exe and nod32krn.exe (Check here). Actually nod32kui is is the user interface (frontend GUI) and I think the nod32krn is the main program.

Try and check the memory usage of nod32krn.exe. I think most people check the mem usage for the nod32kui and say that NOD is very light on the system.

I think u r trying to fool me '(note, firefox, won't show all link, please use IE. hehe)'. Its not that easy to fool a Firefox user. I have the IE Tab add-on.

Oh, i noticed NOD32 only in the early of 2007 and the discussion thread that you submitted belongs to the year 2005. Latest is always best.
Btw, i'm using Vista and NOD32 has only one process i.e nod32kui.exe.
You could try the latest version though..

Seriously, dude, i wasn't fooling you. Not only in my case(to show youthe proper link), but many many big multimedia giants still recommend using IE for richer multimedia experience on Net. And, that IETab, i think is for web designer.. i dunno much.. anyways..

you may be interested on secret Firefox campaign:
http://www.fightagainstboredom.org/
http://thetruthaboutmozilla.wordpress.com/

all of the sites are parado above and truly, people are enticing to use Firefox. i just can't believe they are doing and don't believe that statistics, they are fake.. but i'm sure, you'll be glad reading them out.. hahahha. have fun. bro..

Speed bro, our own perspective and i respect yours :)