By Navin June 15, 2007
With the advent of the computer and it's prowess, now, impossible is becoming possible not only in real-life application but also into portraying ones imagination into nearly life-like visually appealing scenes and effects within the movies. Now, it's hard to differentiate between real and unreal.

Many years ago, the superhero characters which were just limited to mere comics books and stories being unraveled only on the flip of pages, has come to nearly life-like experiences. Movies portrays the depiction of real life happenings. But with fantasy and sci-fi movies bombarding the stores, it makes us feel if that's for real or what after we watch them. But whatever, i must give hat offs to those great effect gurus and computer geek who brought us this wonderful viewing experiences. Batman,Superman,SpiderMan,X-men,The Spawn,The Phantom,Fantastic Four etc.. these all are into movies now.

And today, June 15, 'Fantastic Four: Rise of the Silver Surfer' is releasing all over the world . This movie is sequel to previous Fantastic Four. As i saw the promos and making of this movie, it'll be a great experience watching this movie. 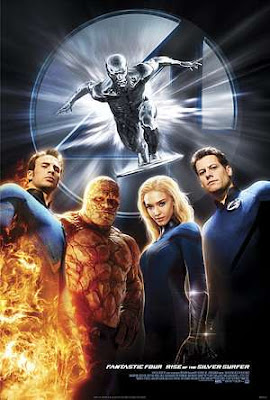 Stars like Ioan Gruffudd, Jessica Alba, Chris Evans, Michael Chiklis, Julian McMahon, Kerry Washington, Andre Braugher and Gonzalo Menendez are in this movie and the superhero team includes in the movie as:

Reed Richards / Mr. Fantastic, who can elongate his body;

Susan Storm / Invisible Woman, who not only can become invisible at will but can render other objects invisible;

Johnny Storm / Human Torch, who can shoot fire from his finger tips and bend flame; and

Have fun watching it.

Binay said…
I just don't like the story of fantastic four. I watched the Fantastic four movie, it was awful. The special effect and everything was good but the story, that's the part I couldn't appreciate.
4 people get hit by something in space and say that they caught a 'disease', the symptoms of the 'disease' being superpowers! and yeah completely different superpowers. I couldn't buy that story when I was a kid and I still don't. That's like so beyond science fiction or whatever.
But I do however like the story of Silver surfer. Eh,but I didn't know the fantastic four met silver surfer. Well, the story seems so messed up. I think this story is also going to be all jumbled up like Spiderman.
June 16, 2007 at 7:14 PM

Navin said…
yeap, you are somewhat true. if normal people would have gone near to sun, they would have turned into ashes.. but these scientists turned into fantastic four. but after all this is sci-fi, what else can we say ?/ and above all, i love those effects ...which i missed in those comics days. I think it's better to see something extravaganza than mere pages of comics. thinking sort like that, i enjoy the effects no matter what the story is. :)
June 17, 2007 at 12:45 PM

Anonymous said…
I have always been a fan of silver surfer since my childhood ........ i just love the fact that this guy posses 1/10 of the universe's most powerful being Galacticus , can manipulate cosmic waves and is virtually indestructible.
June 18, 2007 at 7:39 AM

Anonymous said…
Its just a movie yaar even its from a comics. Can u beleive a person being bitten by an spider can be spider? a man from krypton flying on earth. hmm... those will fit only on stories and for fun we just have to beleive it by staying in virtual world or just inside a movie hall. who guess if it may happen in real life too.... Actually it may not be unreleated with scifi. coz, radition from sun can bring some canges in accordnce to their DNA structure. well some thing like that hehe :p aba euta movie lai factual hunu parcha bhanne pani kaha cha ra... just for fun and to earn.
June 18, 2007 at 4:03 PM

Anonymous said…
even though these stories may seem unreal these stories are so well plotted ........ i really helps to boost ones imagination and helps us realize that we haven't yet reached our limits ........ the three comics i love the most are spiderman , silver surfer and the x-men .

yeha indeed i had this friend in my school days(when i was in class ten) who had some strange passion for spiders .......... maybe because of influence from spiderman
June 21, 2007 at 2:36 PM

Anonymous said…
Great movie, great effects, i liked what silver surfer did at the last sequence of the movie.

Navin said…
um.. i went to peepal bot, no indian comics at all.. he he.. i used to read raj comics, well tinkle is selling most as it's full of knowledge, .. these DC comics were so popular, i don't know why they are not making big sales in ktm.. may be we are Nepalese or the audience are nto here for such comics.. may be.. i guess
June 28, 2007 at 3:50 PM