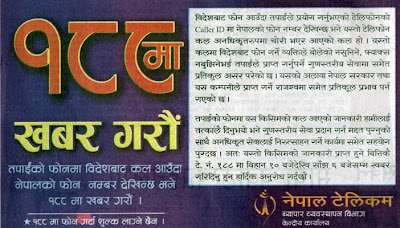 Nepal Telecom has recently published an announcement which notifies the bypass of it's international call by some unauthorized parties in the country. Nepal Telecom wants help from you and me, regarding this problem. NT wants us to inform them at their toll free number 188 regarding the number seen on the caller ID phone when call is received internationally.

According to NT, it's illegal work of some phone mafia. If they can catch or stop this culprit, they think they can improve their service which i don't believe at all. If they've to improve their service, they don't need any excuses and when there was no competitors in the market, they kindda looted us with exorbitant calling rates. I don't need to add more than this, they even charged us just for receiving calls in mobile phones.

So, i've no sympathy towards them. I would have ditched their land line too if i wouldn't have given numbers to some of my important documents. They'll refer to me sooner or later to NT's land number which i currently own. So, it's hard to disown for the time being but sooner or later, i won't use their any services at all.

Nirab Pudasaini said…
haha you are talking about using nothing NT and on the contrary i use everything NT , landline , internet, my pre paid and i would even like to get myself the sky phone .......

Anonymous said…
like speed bro i also don't get international calls (except that one time) and then I don't even have a caller id. But I wouldn't help them. alchi lagcha.
June 8, 2007 at 10:01 PM