By Navin July 30, 2007
All of us know more than 40% of earth's population lives in China. It's kindda regular and normal to see/read news about China's strict policy upon Information Technology. It's very freaking for other free world when they read that China bans this and that sites and imposes restrictions on other online activities and so.. creating/implementing new laws everytime. It's not a big news when i write Google.com once has been banned there. The idea to write this post popped up when my friend Sulav made me aware of a mirror site of google http://elgoog.rb-hosting.de/index.cgi. I had once spent sometime on the site before he referred it to me. At that time, it showed me everything in mirrored form, you need actually a MIRROR to read the result. Everything starts from backward. I didn't care that much at that time. But just now, when i read about elgoog(opp of google), it acted as saviour to Chinese Netizens when google was banned by Chinese government. elgoog is still unmatchable to google, because google is superior to elgoog and elgoog looks and feels like a prank or joke site. 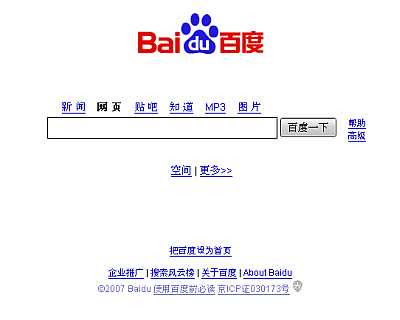 Baidu.com has got a simple interface, since it's in Chinese, we have to hover our mouse cursor on link to read it's English link in status bar of the browser..so as to figure out what the content or hyperlink takes us to. There is separate search for mp3 too. Google won't allow us to search mp3 precisely only the expert user or someone who is profilic in google's hidden command can get through it. But Baidu.com has simplified it for visitors and when i search for specific mp3, i get it in no time. I've already downloaded tons of my favorite mp3 through it. What are you thinking about pal..go and try it for yourself.

I shall reveal more interesting sites in coming days.
Till then take care.