By Navin July 04, 2007
Today, i went to pay Electricity bill and found few changes out there.

Before,I used to wait in a long queue, and it was very tiresome that way. It usually used to take around 30 minutes to reach counter and pay the bill after standing for long time. If it were a sunny day in a summery month, then no one can imagine the hot sunburn and the enormous sweating that cause so uneasy and uncomfortable to someone. Well, everyone had to go through such situations.

But, today, i found something new out there. A guard was forwarding everyone to new direction. I too was forward inside a hall like room. Now, since it's a hall like room, thanks to them, no sun burn anymore. There were seats to take rest too. Umm.. Pretty nice, yeah? Moreover, i found a small machine to print out token and wait for turn according to the number printed on token. The wait would be over when the number on the token gets beep at the hall's digital display(i don't know what is it called).I waited around 5 minutes and paid my bill. 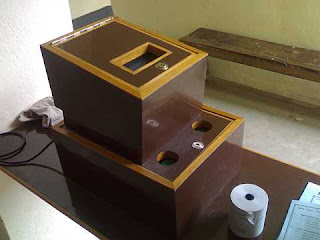 Token-Printing Machine
I had seen system like this while paying up telephone bill. I wished always to see same facilities in Electricity department too and today it happened. 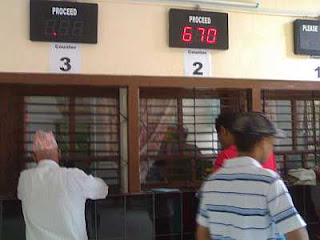 I won't say it as development but i would say some improvements. I would call it development, when all the wirings would go underground,wire-free, tangle-free!!! When will it happen?

Anonymous said…
Wow this change must be a recent one. I went to pay the bill on sunday(July 1, 2007 arnd 1 PM) and guess what happened. There was no electricity there. At first the computers and that bill printing machine were powered by the generators but after some time when my turn came the fuel in the generators finished too and I had to go home without paying the bill.

Anonymous said…
yha ta, well, every month they just send us our electricity/gas bills through post and im not sure how the payment is done, coz i've never paid for one before, but i think they have the payer ko card details so the money automatically transfers, orrrr we send a cheque back to them.
how boring.

suraZ said…
Hey this system was brought in to use months ago about three five months ago.. not only in Nepal Electricity but its also in Telecom's office...
Can I ask u who goes pay the bills to these corporation in among ur family.. Becoz you seem to go not at regular interval. or u r using web payment system huh?? hehe
July 5, 2007 at 10:14 PM

RKK, i know that this system is applied to Telecom for nearly 1 year. But in my area, for Electricity, i had to queue up like a goat. And, i go there to pay my bill on foot, bro.
And there is no web payment system for Telephone and Electricity. We see so many e-commerce sites in Nepal, even on those sites, there is no web payment, because we don't own Credit card and it's direct DOOR PAYMENT method. Albeit transactions are made online, after all paying has to be done at door. :)

Last month, i queued up, and yesterday, i was forwarded towards a hall, and i got fascinated and took couple of pics out there.