I had been visiting www.funmaja.com for all my mobile phone stuffs. Be it ringtones,games,screensavers,movie clips or whatever it takes for mobile phones, www.funmaja.com was my favourite hangout. This site is brought to you by a group of Pakistani youngsters. All the contents out there are not for legal distribution but anyone can go and download the softwares,screensavers,games,ringtones for free.

Now, if i'm not wrong the same guys brought another site www.songs.pk. I don't know when this site is up and right now, feeling pretty lazy to 'whois' on them either. The only purpose of this site is to feed you with the latest bollywood songs. Go there and dig in as much as possible latest bollywood songs. I'm not promoting illegal activities and if you really like songs out there, you should purchase them. Though, you can't easily download songs from there. They've put the songs in embedded format that means as soon as you click the song title, it starts to play off the browser using audio web plugins(i.e quicktime plugin). So, once the song is buffered, it's ready to listen. But do you know how to download songs?? 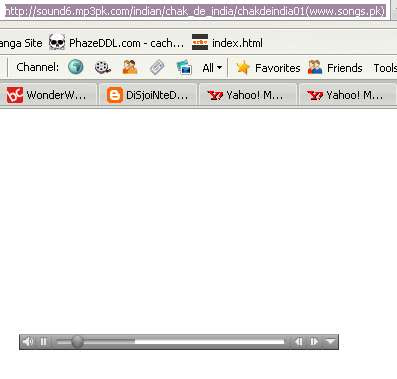 There are 3 methods to save multimedia contents:

i) by accessing cache folder of browsers

Normally, when we finished watching or listening to online multimedia contents, we think it's gone but actually, it's there temporarily in cache folders of the browsers. So, we can retrieve them anytime. If you watch Youtube video or listen to any multimedia files, all those buffered contains sits in cache folder.

In Internet Explorer, it's easy to download the multimedia contents that have been watched on browser.
- Go to 'Temporary Internet Files' folder like below(Note the folder 'User', it could be your account name, 'User' is my default, since i've no account created for myself on my XP. Replace 'User' with your account name in XP)

-Right click the 'Temporary Internet Files' and you'll see there is no 'search' on it. So, cache folder is not searchable. I've listened to song "chake_de.mp3". So, i would access the folder and manually search and select the song . Then copy it to some safe location on my harddrive. 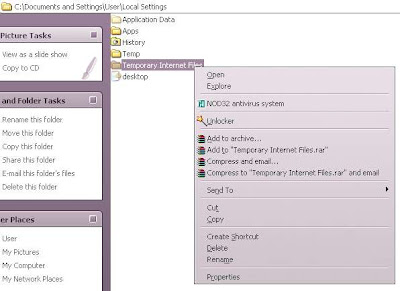 In Mozilla Firefox, it's hard to trace the files you've viewed on browsers. In the address bar, type "about:cache" and hit enter key. You'll see the information about cache folder. Follow it. Once you reach the cache folder of firefox, you'll have to make guess work about your possible multimedia content by yourself. I downloaded 'chak_de.mp3' and i estimated it is about 4 mb. So, on the cache folder, check the file size, once confirmed,copy it to safe location and change the file extention to mp3. That's it. 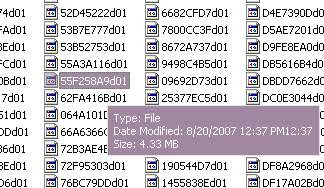 While your song is being buffered, check the internet browser for file location immediately. Copy that location, use any download manager, and give the URL address on it and download it off the Download manager. I used Download Accelerator plus(DAP) and my song instantly started to get downloaded. As soon as, the download started in DAP , i closed the one that is being buffered. 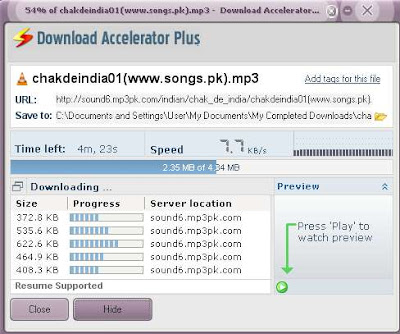 iii) by using Quicktime plugin itself

If your song is being buffered, as soon as it is completed, check the right-most icon. Click it and select 'save as source', give the location and your file is saved. I think this is the easiest option if your plugins give you the save option else you've to follow the step i) or step ii) accordingly.

Hey, I download my Indian songs from www.papuyaar.com
I find it easy there but I will check this one out aswell!

I went on it! It's great.
I got Kailash Kher and Adnan Sami ko songs now!
Thanks!

Is there something wrong with the way I am downloading it because it's not like the three ways that you've shown.
I just go to the song and right click and save as. Is that right?

Prerana, thanks for sharing that links. it's nice.

yeap, you can download the song that way to but i don't know when i did that,it saved in "song.php". i had to change song.php to song.mp3 using DOS and finally it was playable.

Hmmmm, maybe our computers are a bit different hehehe.

i think my firefox browser is acting weird

Before, it was called Netscape Navigator and it went opensource and in an attempt to be better than Microsoft Internet Explorer or to break MS IE monopoly market in Internet Browsing, it has taken shape of Mozilla firefox.
Mozilla Firefox is one of the internet Browsers like Microsoft Internet Explorer.
We have other internet browsers too Opera,and.. i forgot the rest of the name.. ehehhehe