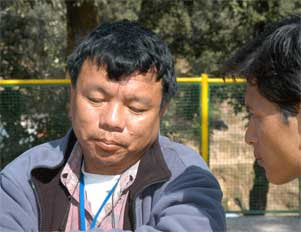 Mahabir Pun
My country, My birthplace, Nepal is land of diversities. There are still so many places and villages where just dreaming to reach is nightmare. It would take around weeks of walk to reach those places. Despite it's remoteness and inaccessibility to outer world, some son of tiger dares to dream big and makes it happen. There is a village in western Nepal called Nangi. Though it takes around several days of walk to reach that village from the main road connecting different districts in the country, people out there is communicating with the world outside. It's all because of Wireless Internet and the son of Nepal who made it happen is non other than ex-gurkha's son Mahabir Pun. 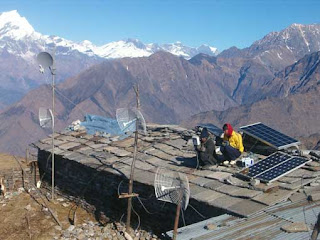 Relay Station 2, Khopra with Antennas Pointing to Different Villages
Elevation 3,600m (~12,000 ft)
Mahabir Pun first dreamed of connecting his village of Nangi to the internet in 1997, and has been working ever since to bring the internet to rural Nepal. Mahabir was born in Nangi, and completed his primary education there.
After working as a teacher for several years, he completed a master's degree in education at the University of Nebraska at Kearney. Mahabir has constructed computer labs at several schools in the area and planned out the entire Nepal Wireless network. He plans to to continue to expand access in the future. - http://www.nepalwireless.net 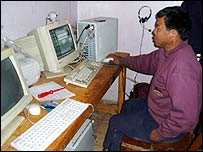 Mahabir Pun at work
What started as a venture only for his locality has now become the nation-wide project. People are hugely benefitted with his projects. Now, his project is directed towards connecting all the remote areas of country. I read in one interview that people are greatly affected with the boon he brought. Villagers can now make telephone calls, tele-medicine is working fine and exchange of ideas and informations all possible. Some dying people got new life because of tele-medicine where doctor prescribes medicine from other end.

He is very down-to-earth person and very ordinary looking guy who induced big donors like Bill gates to donate for the development of remote villages, Information Technology and living standard of poor Nepalese who are forced to live under poverty line. I'm really touched because of the way he conveys his messages and to know his virtues intentions. He is very deliberate person that i came know when he made computers for the schools he opened in his villages. He made computers to operate by assembling parts from the debris of computer wastes. He made wooden casings for those motherboards and other circuitries to remain in single box. He thought that some other's waste is big assets for poor Nepalese people. So many westerners are amazed by his efforts and admiring for his noble cause. He taught basic computers and other education for his poor people for free. 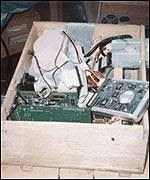 Wooden casing for CPU parts
Therefore, we all Nepalese felt very honored when Mahabir Pun was awarded with The 2007 Ramon Magsaysay Award for Community Leadership. He really deserves this honor. But, he thinks it's too early for him to get this award(though he doesn't expect for any award or his efforts were not award-motivated) since he still has so many achievements to get. Whatever, i personally like to thank him and pray to god and wish him(from all of us, proud Nepalese) best of luck in all his endeavors. 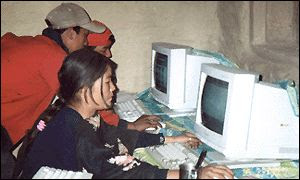 Villagers learning computers
Mahabir Pun, you are the true Humanitarian and our country Nepal needs people like you, not people like Girija Prasad Koirala(and gang). You are the real son of Nepal. And Congratulation to Magsaysay Awardee.

PS:-
Established in 1957, the Ramon Magsaysay Award is Asia's highest honor and is widely regarded as the region's equivalent of the Nobel Prize. It celebrates the memory and leadership example of the third Philippine President, and is given every year to individuals or organizations in Asia who manifest the same sense of selfless service that ruled the life of the late and beloved Filipino leader.
- http://www.rmaf.org.ph/

There are now altogether 4 Nepalese who hold this Award.
Few months ago, i reviewed Dr. Sanduk Ruit. Another Nepalese to hold this award. Click here to read Ruit article.

Anonymous said…
He is the man... A man whom Nepal needs... He really deserves the prize... but can u write about the exposure he got to the eyes of the judges over at prize decision.... most of the times these big hearted people are not noticed.. Salam Pun dai
August 3, 2007 at 9:02 PM