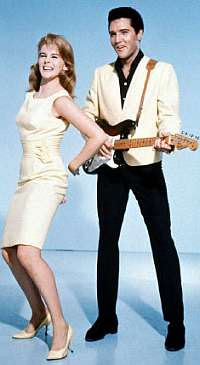 A tribute to the great king of rock n roll 'Elvis Aaron Presley' - R. I . P . I was supposed to post this few days ago but i was going through under big pressure and depression due to hell of a works.
I've been his big fan since the time i've known his music and songs, precisely since my childhood. I came to know about his songs, when my grandmother used to play his songs and used to make me dance on the rhythm. I enjoyed and i insisted only on his music ever since. Then i joined college and i started to find about the music i used to listen. Officially, i found the name Elvis Presley as the man of voice behind the magnetic music and songs. And, i started collecting his albums , more and more, i Watched couple of his movies and i read all his biographies. His life is truly inspiring and how he presented himself to the world. Starting as a struggler to fame-name charismatic life, he has everything to be inspired of. When i read about other of his fans, who still don't believe he's dead. I'm not one of them. Because, he had been dead for 30 years and it's the reality, bitter reality. But still, he's alive deep inside all of us who thinks he's a great human being and a great idol. I feel glad when people impersonate him, i can't do that because of my social structure but surely i would love to visit his home, graceland one day at my own expense.

Elvis Presley was born in Jan,8,1935 and he was found dead at his own home at graceland in Aug,16,1977. During the time of his death, it was really shocking to find out that he was badly addicted to some sort of prescribed drugs that led him to death. Whatever, he will be my role model/idol for ever. His songs are so great, so melodious and so rocking. Needless to say, before him, there was nothing like sensational music. Even John Lennon said once, "Before Elvis, there was nothing." It won't be a lie if i write here, Elvis Presley is daddy of all rock music today including today's various genres like blues,metal,RnB,pop,hiphop,etc.

you'll get almost thousands of elvis songs at your hard disk to fill up.