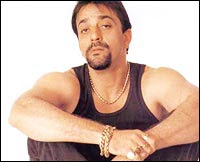 I really felt bad, when i was eagerly waiting for the good news regarding Sanjay Dutt but,.. bad news. Sanjay Dutt got jailed for 6 years. To me, only possessing weapons must not be enough reason for him to be jailed. Why these Indian Court forgetting that he is a celebrity. May be his past is not that good and not inspiring for young blood but just because he has some nexus with underworld doesn't necessarily compel him to be jailed. 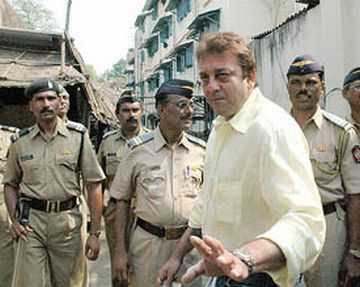 In 1993, there was a gruesome bomb-blast in Bombay where more than 260 innocent people got killed. Those who committed that crime,they were definitely terrorists and they should be treated as same. So, i read some 10 or 12 terrorists for commiting that crime have been hung under death penalty whereas some criminals under the same charge as of Sunjay Dutt have been released on bail. Then, why not Sanjay Dutt?

I've been a big fan of his movies, i particularly liked his movie called 'Vastab'. He has strong character out there playing as a gangster and depicts the bad ending of gangster. I think, he is paying his debt just for having some connection with the gangsters who were somehow involved in that Bombay blast in 1993.

If i analytically see this action of Indian Courty, there is a message. A message not to be in touch in anyway with those social culprit who keeps terrorising people's lives. There is a saying in Nepali, "Koila lai Choyo bhaney, kaalo daag afnai haatma pani laagcha" something like that which means " If we touch coal, we'll get our hand dirty ". This is nothing but a message to bollywood, stay out of those social culprits which is known as Indian DON else be ready for the consequences. Whatever, for fan like me, i felt bad but in long run, this will definitely minimizes the Indian Underworlds involvement in Indian Film industry.

Today, i read Sanjay Dutt didn't sleep well on first day of his imprisonment. His eyes were soaked and there was fury in his eyes at the same time. He just had 2 apples as his dinner meal and nothing more than that. Policy custody is not letting him meet with his family members. That's against his basic human rights. I also read, a police superintendent misbehaved him. I think that policeman deserves a slap under his ear, because he is forgetting he's a celebrity then he's some convict under Indian Law. As a celebrity, he has been paying tax to Indian Government out of his income and he's not yet killed intentionally any people. Indian Court seems avenging Sanjay Dutt out of personal grudge.

If Salman Khan rode his vehicles over the sleeping homeless, and still he's breathing in fresh air. Khan who has been accused of hunting animals and still free. I think Sanjay Dutt should be treated same. His punishment must be minimized.

I agree,for illegal possession of firearms acquired from terrorists, who were responsible for the 1993 Mumbai bomb blasts, he must be punished. He must be punished for keeping illegal arms. He must not be punished as of killing those 260 people. He has nothing to do with that. Sunjay Dutt, if god is with you, you'll be released very soon.