Yesterday, i went to local downtown shopping center with my Father. He had lost his At&T cingular phone back there in Nepal. He suspects some CHOR(thief) taxi driver must have done that since he lost that in Taxi. He deactivated that service then in Nepal since it has roaming service all around the world. For me, At&T is good because yesterday,in downtown mall of San Francisco,it's local agent provided extra SIM to my father and they activated the suspended service. He put his SIM to my N70, i profiled it according to his choice and it worked great.

Back to home, i was thinking how to hook up my laptop with my father's aDSL broadband connection. I've been used to wired networking, cross-cabling and straight cabling, all the color-matching of individual pair of colors so that it could work in switch/hub for straight cabling or cross-cabling in direct connection between two PCs. In Nepal also, we've router to meet the need of wireless connection for home but i never used router when i was in Nepal. I only knew the basics of what it is and what it does. Now, father has this D-link DI524 router connected to his desktop Dell computer unaware of what it does. One of his friend from Bhutan tried to solve the unsolved mystery why other wi-fi devices are not connecting to the internet the router passes. My father told me, his friend who is computer technician by nature gave up. The same venture was going to be started by me. I had to start where he left. This wireless connectivity was totally a new concept for me. I really didn't know from where to start and finally, i determined and built confidence in myself and started to put some logic. I took little bit of help from google, tried to search some knowledge base,entered irc junction of some geeks, took some live chat support but all of them were crap. Someone in IRC acted like he's trying to help me but instead ended up giving me the details what he has on his machine rather than giving me the precise solutions.

My problem scenario was like this:
aDSL modem - aDSL line is a phone line which connects to the special modem called aDSL modem. This is something when phone never goes busy signal even if it's put into use as data transfer. I mean same phone line can be used for calling and for surfing net. In Nepal, if we are online, we can't make phone calls but this aDSL thing is different. This is the same phone line with RJ11 jack which connects to a modem(aDSL) and then to a PC's ethernet port.

To simplify this concept even more, lets check this figure:

In this figure above, blue line is a telephone line with RJ11 jack and red line is mere ethernet cat5 cable with RJ45 jack. Now, we can simply assume how aDSL modem made up of. It has ports for RJ45,RJ11 and one DC port for powering it up. So, phone line(blue line in figure) connects to RJ11 port of aDSL modem, then the modem has to transfer data to PC which is done by the ethernet cable(Red line in figure). That's it.

This things were simply got into my head. There was this D-link router. Now, that was the part which started giving my head a lot of confusions. I figured out,someway, data has to pass on Router and then it would relay the packets through it's antenna wirelessly.

D-Link Router - I only knew router is something which routes or passes the packets(data) across the networks. Here, it's wireless Router because, it has to pass the data through certain frequency. I checked the back of D-Link router and found there were ports like WAN, LAN1, LAN2, LAN3 and LAN4 and one tiny hole (just like in CD DRIVE for emergency ejection using needle or paperclip) and of course DC jack for powering it up.

Simple logic made me clear how it should go. The ethernet cable which was connecting from aDSL modem to the back up of PC's ethernet port, now has to go to WAN port of the router. and from the router, using the LAN1 port, a new ethernet cable(which comes bundle with router) has to be attached to ethernet port of PC. This was the simple logic i used and it worked for sometime without problem, without needing to configure a line in windows. I turned on the Wireless button on my laptop and tried to connect the router, because it showed the available networks. I selected the router's computer name and promptly was using Internet off the router. It went fine for few minutes and suddenly, i had no connection on my laptop. I checked on Desktop PC too, there too was no connection. Connection was dead on both computers. 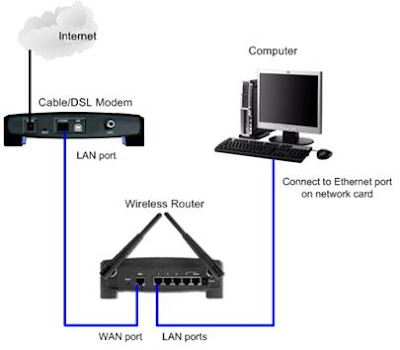 I tried it for many times, and same thing happened. Connection for few minutes and then nothing. If i disconnect the router, it worked flawlessly, i mean internet was accessible but when i connected the router, same thing happened. After searching net for sometimes, i found to reset the router. Resetting is to insert the paper-clip on the reset hole on the back of router which in fact reset back the router's settings to default. 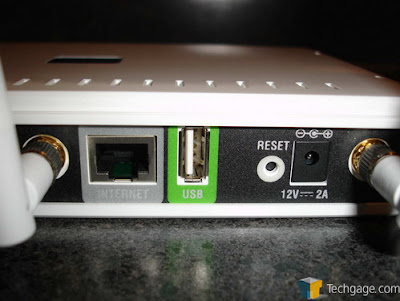 Router's Reset hole
I did that, i checked the routers manual and entered 192.168.0.1 on my browser, through which i could tweaks lots of routers settings. this time, i was fiddling around with the software part because, i knew there was nothing wrong in hardware installation. I changed the password, i created new encryption key. Now, i turned on my laptop, i enabled the wireless and whao, it detected my router, and hence i connected inno time. I checked internet on both systems and this time it went more than 15 minutes and i confirmed, resetting the router did the magic.