Let's be proud of being Nepali

By Navin September 26, 2007
Prashant Tamang, an Indian of Nepalese origin, once again gave Nepalese around the world reason to be proud of our glorious past. By profession a policeman and singer, Prashant is the first contestant of Nepalese-Indian origin to win the coveted title "Indian Idol 2007". 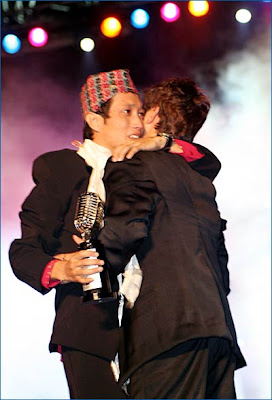 Native of Tungsung, Darjeeling in West Bengal, Prashant Tamang is the only son of Rupa Tamang and her late husband, police officer Madan Tamang. He has one sister.

India's modern history is not complete without calling up the names of many brave and talented Indians of Nepalese origin. Many of us are unaware that the composer of India's national anthem and the song 'Jana Gana Mana', was the late Capt. Ram Singh Thakur, also of Nepalese origin.

During the Indian Independence Movement, thousands of Nepalese and Indians of Nepalese origin fought the colonial British Raj and sacrified their lives for the freedom of India. Nepalese Indian martyrs Major Durga Malla (executed in Old Delhi Jail, near Delhi Gate-August 24, 1944) and Capt. Dalbahadur Thapa (executed at Central jail, near Lal Killa, Delhi-May 3, 1945) were among the Indians who were executed by British Raj.

77 years ago (1930) when Mahatma Gandhi launched his famous Salt Satyagraha (Salt March), the most inspiring event in the history of the freedom movement of India, there were two Nepalese (Mahavir Giri and Kharag Bahadur Singh Giri) among 78 other satyagrahha marchers.

2500 years ago, Gautam Buddha, who is known as 'Light of Asia', was born in Lumbini, Nepal but his enlightenment was attained in Bodh Gaya, India. Most of his life-long preaching took place in Northern India and thus enriched the ancient Indian philosophy by spreading the message of love and peace.

Be proud to be a Nepalese (Nepali). Celebrate the success of Prashant and spread the news of the glorious present and past of Indians of Nepalese origin.