but i don't know who is guilty here
to send me on earth after long year
though i like i can't love her it is so bitter
but this is the truth i can't get what i prefer
i really hate this......

if i was born 10 years later
i would have been 4 and that's better
it would've been carefree life for sure,
this cute little girl making me allured

but i don't know who should i blame for this
i am 14 now she wants to be my lil sis
though i like i can't love her it is so bitter
but this is the truth i can't get what i prefer
i really hate this......

he looks desparate cause he sighed
he must have felt as if she just lied
yet he looks calm and hasn't lost his cool
is it april 1...i think she made him april fool

[chorus]
he watches the watch again
turns around and stares that alleyway
it probably is the way she would come from
innocent little face
oh it's quite long he's been waiting...........
ain't she coming ?

I was fed up of watching TV
I was feeling bore guess it was 5:30
Then I switched on my computer
Cause I didn’t wanted to get much borer
After I got my XP window opened
My favorite play list I put them on

i'd even risk myself
for you i'd go against
everybody else

These songs are written by my young cousin bro:
Lovsang 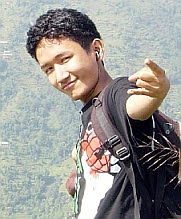