By Navin November 25, 2007
I've always been fascinated by robots. And, it's great esteem to own my first robotic pet. May be the robotic toy that right now,i'm talking about is not new but few years old. Because, i saw it then in "Biswa Ghatna"(local nepalese TV Program) about this robotic toy. Back then, it was awesome but still when i bought it today, it's awesome. There were other Robotic toys(robosapiens and so) which were very expensive to own and could be programmed through PC from USB port. 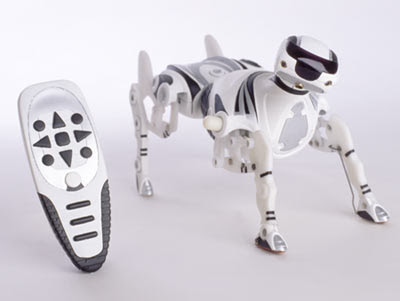 Being dog lover, i chose RoboPet. RoboPet is name for Robotic Dog. The things i liked about it is, it can virtually do all things that a real dog can do except pee and shit. I really had a great fun trying to understand and play around with it. In fact, i didn't have any intention to purchase this thing. It was a sudden buy because, we were searching for gifts for my aunt's daughter whose birthday was today. So, we purchased this thing for her actually, and i thought to buy one for myself too. I've always been fond of electronic gadgets and i really do pay attention how they work. I found, RoboPet has infrared sensor on it's head. It can detect any movements. There is another technology called ED i.e Edge Detection which can detect Edge and if you leave this thing on Table, it won't fall. Because it will back up as soon as it senses there's a fall ahead. It does this by it's infrared image reception of nearby objects. You can control it with Remote Control and if you don't want to use Remote Control, it becomes Autonomous. It's the autonomous state where it uses it's AI(artificial intelligence). During it's autonomous, we can see it doing things on it's mood. If we praise it, it is encouraged to do activities that we praised for more and more and if we don't praise it at all, it becomes silent or may be it takes short sleep. So, this thing acts just like a real dog. I mean, we can command it using the Remote Control and when we don't use any remote control, it plays at it's own. It even follows us if it sees us. And, if I configure it to bark on stranger, as soon as someone goes nearby,it jumps and makes loud noises and starts barking in electronic sound. It's really cool. It can do more than 9 tricks and it's really fun to see all those tricks.

I've recorded video of RoboPet and myself playing. It's inside.

NKM said…
Nice post.
I have been dreaming some intelligent designs/stuffs.
I wrote this as fiction: http://ajabgajab.blogspot.com/2007/12/iadvisor-fiction.html.
Please comment.