A new Laser is invented to kill VIRUS

By Navin November 02, 2007
Professor of Physics,Khon-Thon Tsen at Arizona University and his son, have developed a laser technology that could kill virus without harming human cells. When i was reading first line of this news at wired, i was thinking this could actually kill HIV virus too. My guess was right. As i kept reading on and on, these two father and son are giving their day and night on experimenting how to deal with HIV virus. If this groundbreaking laser experiment goes successful, there would be a ray of hope for HIV victims. But this is going to take little bit of time according to them. 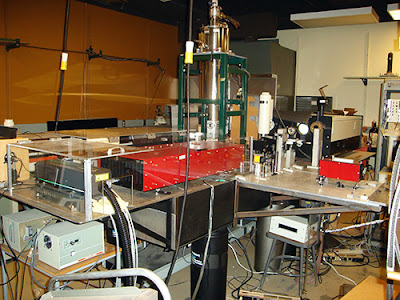 Prof Khon-Thon Tsen's Laser device
"We have demonstrated a technique of using a laser to excite vibrations on the shield of a virus and damage it, so that it's no longer functional," said Kong-Thon Tsen, a professor of physics at Arizona State University. "We're testing it on HIV and hepatitis right now."