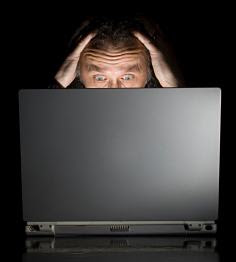 What would you do if your cell phone's bill for one month exceeds $85000. Well, technology is boon for many of us but curse for people like Piotr Staniaszek(22 years old Canadian) who was oblivious to the rising bill of his phone.
It's not because of the calls/SMS he made back and forth, it's because, he used his cell phone as modem and downloaded tons of stuffs off the internet. Thinking good of what he did, he kept surfing but downloading more and more. He never ever thought of the bill he got.

"Here, I'm $85,000 over and nobody bothered to give me a call and tell me what was going on." he lashed out to his phone company.

He normally was paying not more than $150 a month for his cell phone use(without using phone as modem). WOW..that's way too much for me. Unlike, I paid only around $20 per month to MeroMobile(privately owned telecom in my country) which gave me unlimited internet and downloads. I used my cell phone as modem then and it was good service. I still advocate for MeroMobile because of their genuine services.

Well, when i read stuff like this, i can't help laughing. Because, at least one has to have a good grip on what he's doing. If one doesn't know what he's doing, he is at stake of uncertainties. May be it's his cellphone company's fault too by not informing him at time about the rise in bill. But guess what, his cellphone company did try to inform him about the bill of $65000 and he thought it was some sort of errors as he was told something implying that way. He didn't care and kept downloading on and on. And, there came $85,000 bill knocking his door.

Unlucky fellow, on his defence, he only had to say,"I told them I wasn't aware I would be charged for hooking up my phone to the computer. I'm going to try and fight it, because I didn't know about the extra charges."

But whatever, their telecom bills are exorbitantly high as compared to other countries.

deepa said…
Firstly our blog’s this look is nice. And wow me just thinking to start GPRS service in my cell but I thing now I have to thing again. Thanks for this information.
December 30, 2007 at 6:54 PM

Navin said…
hey, deepa, use GPRS in NEPAL and use MERO MOBILE :) ehehe.


and this article was for becoming SMART. not refraining from using latest technology. Don't get me wrong please :)
December 31, 2007 at 8:25 AM

Navin said…
Oh.. but TELCOM here would chase after you(may sue you) and may spoil all reputations..