By Navin December 19, 2007
Right now, i'm writing these words from my Toshiba Satellite laptop. And, i'm equally excited to learn that the same company is the first ever in the history of computing to release the Notebook with HD DVD-RW drive. I'm sure, people will read the fact sheet in coming decades like "Toshiba released first Notebook with HD DVD-RW drive". Before i rattle on about this humongous beast, one can have a quick look at it's specs: 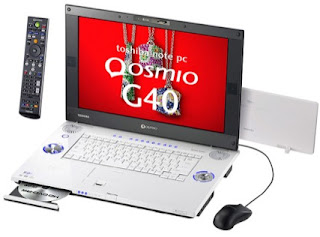 Now, the possibilities are immense. Watching high quality HD movies/programs is possible in notebook portable computers. I came to learn that one could easily record the live transmission and shouldn't be really worried about the storage though. I mean this beast has everything new,one could ever imagine in a laptop.

But, it's pricey and bulky,approximately over $3500 and over 10 pounds and you really need to have big pocket and big muscles to handle it. Next week, it's going to be launched in Japan. I don't know and have no idea when it would come to USA or other part of world. My local toshibadirect.com has no info about it.