By Navin January 06, 2008
As i was visiting my friend Vickie's blog today, i found that one of her country's major Blog Advertising Network is having some serious issues. That really bugged me. How come a big companies like them can play with their subscribers? and little research showed me that Advertlet(dot)com is one of the largest Blog Advertising Network of Malaysia and no doubt, most of it's marketers,subscribers were Malaysian Bloggers.

When some big IT companies have fate like this? it's the beginning of their hard days ahead.It is because People won't believe the service anymore.

Most of the bloggers were frustrated because, as soon as they tried to open their blogs, after few seconds it ended up being onto some expired domain's parking details. Something like below appeared to all of those blogs, who had Ad scripts of Advertlet installed on their blogs: 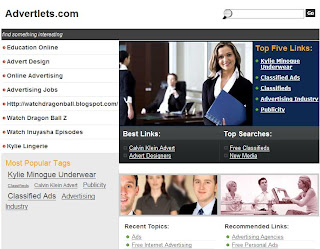 Why were they redirected to Advertlets main page? I'm not member of Advertlets and i don't know how their core worked but according to my understanding, if someone has to have PR quickly and illegally, we usually inject a small code on .htacess in the root which steals the PR traffic of big sites. Were Advertlets Ad scripts devious? I dunno, just my perspective.

Besides,this clearly shows that this company is totally irresponsible towards it's subscribers. And, it seemed to me that it all happened because, the company didn't renew their domain in time. Usually, what happens is we get informed before one month (or more) our domain expires. And, it seems, the owner of this company realized this issue only on eleventh hour which was of no use.

According to Josh Lim himself, founder of Advertlets, his site will be online soon but what about the prestige he was earning. Will bloggers believe him? This is the main question. Eventually, people worrying about their time and effort may join their login page as soon as site re-opens but what about new subscribers. Advertlets may know themselves.

Anyway, i'm no way related to Malaysia but the only thing that bothered me is when such big companies play irresponsible role? it's gonna have side effects on other evolving sites too and which is not good.

And according to Josh Lim, a temporary fix would be:
Editing your computer's host file manually:

and founder of the company is claiming their site will be back soon. It will take at least 72 hours to resolve domain name to it's DNS number.

To check with this issue and related news, may be you'd like to visit the blog of Advertlets founder.

yaya said…
i know nothin about ads but i know everyone is talking bout it.. some of them just remove the ads so the problem is fix.

ps : hehe thanks Navin for the compliment, i will try my best to write in english nex time [coz im still learning n improving my eng].
January 6, 2008 at 4:12 PM

RJ said…
a friend of mine was sadly a victim of this one. You are absolutely right, i think that it could get bothersome and some might not be as forgiving.