By Navin January 27, 2008
Past few days, It's been raining here. And, it's just raining. I don't like rainy seasons I dunno why but whoever I asked, I've never met someone who has said he/she doesn't like rain. May be I'm the only guy who doesn't like rain. 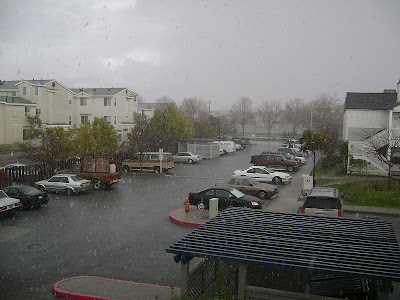 It hailed sometimes .. bad weather, I don't like it(view from my place)
But, today, it did stop for few hours. After a tiresome trip to San hose and back to home, I took my usual evening walk and roamed around the Wharf. I saw Sea Otter floating on the water trying to break some sort of shell,may be for it's dinner which it might have picked from the surface below the sea.And, a Sea bird trying to steal it's prey, that was awesome and I managed to capture it in my camera. Hope you guys like it. That's how I spent weekend today. Back to home rushing, it was drizzling and now, by the time I'm writing this post, it's hell of a rain outside. Damn!! I hate rains. 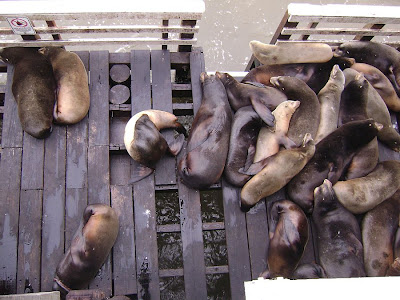 Bunch of Sea Lions at the Wharf, taking rest lying their neck to eachother's body

Hope you didn't get bored with my rambling.

Anonymous said…
The regular raining is disgusting but sometimes raining is too much intresting. Do a try to be alone walk in raining with humming sound(with songs with you) you will feel that Mr. Navin doesn't hate raining, feel the each drop that is falling in your face.I am sure, You will then be started to love it because no one can be out from his/her childhoodness till the end of life and that raining remind his childness.
January 27, 2008 at 3:32 PM

Navin said…
Ametya Ji, I did try walking on rain, and I'm having this bad sore throat now. Even swallowing my own saliva has become a part of adventure for me. May be I'm not suitable for Rain or may be I'm allergic to it. But with your words It seemed to me it's quite fun being under the shower of rain. Yeah, there are some moments or memories with Rain, which I would never forget :) but winter rains are something which I'm not accustomed with. Ametya Ji, you'll be surprised to know that here, esp only in Santa Cruz, it's the opposite of the weather we have in Nepal. I mean, Rainy season in Winter, green leaves in Winter, This is weird here. Usually, in Kathmandu, I witnessed opposite of this kind of weather. Summer rains are what I like sometimes. :)
January 28, 2008 at 4:26 AM

Nisha said…
Navin, you're not the only one whose blessed with this unique DNA;)I hate winter rains too!!summer rains are great though:)