By Navin January 10, 2008
Nokia N95, a strong contender to Apple iPhone, is coming in American markets with a bang. Nokia announced, the optimized version of the popular Nokia N95 will carry a feature to support 850/1900 MHz (HSDPA)high speed downlink packet access. With that, high-speed connectivity will be possible even on Mobile phone which equals or even exceeds the speed of home aDSL connection at some point. So, i would suggest people to try N95 since it has now 3.5G standard. 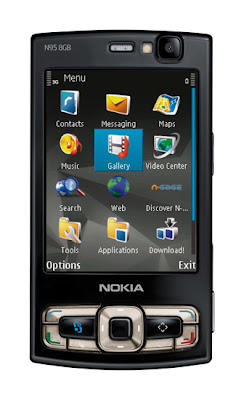 Some Asian and European markets already have N95 with 3G standard where they could use the video telephone services at ease. But with this new 3.5G protocol based Nokia N95 targetted for America's market, it seems obvious that there will be some impact very soon on mobile phone markets.

Note: HSDPA, is an abbreviated form of High-Speed Downlink Packet Access which is a new protocol for mobile telephone data tranmission. It is known as a 3.5G (G stands for generation) technology. Essentially, the standard will provide download speeds on a mobile phone equivalent to an ADSL (Asymmetric Digital Subscriber Line) line in a home, removing any limitations placed on the use of your phone by a slow connection.

yaya said…
wat is 3.5G anyway, i mean the different btwn 3G?

Navin said…
Hi Yaya, it's one step up to 3G standard.

"HSDPA, is an abbreviated form of High-Speed Downlink Packet Access which is a new protocol for mobile telephone data tranmission. It is known as a 3.5G (G stands for generation) technology. Essentially, the standard will provide download speeds on a mobile phone equivalent to an ADSL (Asymmetric Digital Subscriber Line) line in a home, removing any limitations placed on the use of your phone by a slow connection."
January 11, 2008 at 10:43 AM

Will you plz clarify the different features of 3.5G in more details.And as long as I know HSDPA is Japanese technolgy while Europe and America are using TDMA and CDMA technology.And even AT & T had announced that, seeing the high demand of tdma and cdma, the next generations will be developed on the basis of these two technique. I am totally confused, may be i wrong too. Plz clarify it.
January 15, 2008 at 10:17 AM

3.5 - it's still prototype for me, haven't used/seen them working but just getting know how their protocols work. as fast as home aDSL network :)
If this beast did outcry successfully, home router will be replaced.. just my judgement(guff). again :)
January 15, 2008 at 12:32 PM

Anonymous said…
Uh, I was wrong. HSDPA is not a Japanese Technology, I got confused, rather it is a latest technology to support high speed of packet data to make internet access brillient.
January 16, 2008 at 11:01 AM

Nirab Pudasaini said…
High Speed Packet Access (HSPA)is Based on UMTS protocol. It is divided into two standars: HSDPA (downlink) and HSUPA (uplink). HSDPA can also be called "3.5G" and has theoritical data transfer rate of around 10 Mbps. So with this standard multimedia and streaming vedios will be main focus. I dont think there are many service provider for this standard but the most of new high end phones are HSDPA capble.
January 17, 2008 at 10:13 PM

Navin said…
even if someone brings it(unlocked) to Nepal, it'll be used only for calling, ..nothing more than that ..

Navin said…
Ametya Ji, that's the bitter reality.
Because, I never believed NT's announcement and when they were actually bragging about their new GPRS service launch, I was surfing net on my home desktop though my GPRS enabled mobile phone(making it as a wireless modem). The GPRS serviced I used belonged to SpiceNepal's MeroMobile and I've given comprehensive tutorial on my old blog regarding 'how to surf Internet on desktop using GPRS enabled cell phone. '
If you like to see that thread, it's here http://infotechnepal.wordpress.com/2006/10/31/how-to-connect-your-pc-to-internet-using-meromobile-gprs/
And, I firmly believe, all my Nepalese friends using GPRS of MeroMobile have been greatly benefited by my tutorial. More than 10,000 people have read that thread alone.

Well, sorry I bounded out of topic. My verdict: SAY NO TO NT(C), (please don't think I'm endorsing SPICE NEPAL, I'm no way affiliated to them, I came to this decision, because, I started using NT's PostPaid and later I had to switch to MeroMobile. This is just my mere perspective as an end user of both services)

May be their(NT) landline is okay and been longtime, but wireless service sucks bigtime..
January 19, 2008 at 3:45 AM