By Navin February 21, 2008
Blu-ray and HD DVD, they are the new standard names for the storage media.

After, storage capacity of 650 MB on CDs, standard 4 GB DVD's are hugely popular and have become standard for backing up your digital contents. There are 8 GB Dual Layer DVD's too but It's very hard to find here near my locals. It's America and I couldn't find one at all the big stores like Circuit City, WalMart, Staples etc. I don't know why they are not widely available but sure enough, there could be some compatibility issues. Now, the next generation of storage Media is either Blu-ray or HD DVD.

Blu-Ray medias are backed by Sony Corporation and has been incorporated already on the Playstation 3. Whereas HD DVD's are backed by Toshiba company and these medias are already used on XBOX 360(with that written, MS also has been backing up this). Storage-wise Blu-Ray holds more data of about 25 GB than of HD DVD's 15 GB. 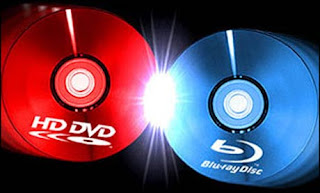 It's obvious, and if somebody asks 'Would you go for Blu-ray or HD DVD'? I would go for Blu-ray , as simple as that, it has got bigger storage. And why am I asking this? because, Blu-ray won't work on HD-DVD players and vice versa.

Final showdown between these two media types has proved that BLU-RAY is the winner. Because, Toshiba officially announced it's not going to endorse or continue to produce any of the HD DVD product. This is the clear sign that HD DVD is not going to be the next generation storage media. It's BLU-RAY.

Therefore if you were thinking which storage media to opt for, think nowhere else, shell out your money on BLU-RAYs. Because, it's the next standard for your storage demands. Mark my words, spend on BLU-RAY's. Because, HD DVD lost the battle and companies are favoring BLU-RAYs only. Everything from Video/Games/Softwares/ etc will be ported on BLU-RAY in coming days.

By the way, do you remember LASER DISC?? what happened to it? CD and DVD killed the future of LASER DISC. Same is going to happen with HD DVD. Because, whoever has invested on HD DVD, it's not that bad either because, it'll sustain for few more months and it's wise not to spend on it but on Blu-rays. This is a consent of a responsible blogger(like me) who never gives out false suggestion.