Don't you think You should really know at least a thing about your COMPUTER MOUSE?

By Navin March 12, 2008
Life was miserable without 'mouse' attached to computers. My first experience with 'mouse' was pretty amusing. Old DOS operating system had all those day's useful softwares but no 'mouse'. When Windows 3 came, need for pointing device called 'mouse' was so inevitable. The very first time, I touched it, I thought I climbed Mt. Everest. Experience was of that level and click with those left button on 'mouse'. whao, I felt like click-a-click all the time. These input devices are also known as HUMAN INTERFACE DEVICES. Have you noticed things on your Device Manager, something written 'Human Interface devices'? 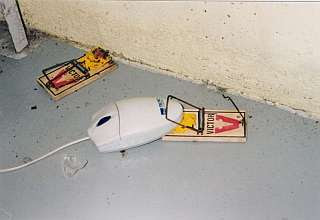 All those pointing devices have made our life lot easier. Did you know keyboard wasn't separable like today we have? Keyboard was obnoxiously fixed just below the awkward monitors. Thank god, keyboard acts like a remote control these days. I mean wireless keyboard and mouse, sit on coach and control your content on your desktop from feets away. This is really something cool.

Looking back to those days, it really chills me when I see something like below, where NOW CEO,Microsoft(Steve Ballmer) ,then just a partner/buddy of Gates, bragging about his OS, with no mention of any input features. It's hilarious you know..

Whereas, Apple Macintosh had already included 'Mouse' to their machine by 1984 and onwards.

And did you know that every time a mouse moves or the user clicks a button, the mouse sends three bytes of data to the computer it's attached to. Turning back to history, now ubiquitous direct manipulation interface, where visible objects on the screen are directly manipulated with a pointing device-like with a mouse or a light pen - was first demonstrated by Ivan Sutherland in Sketchpad, which was his 1963 MIT phD thesis. Sketchpad supported the manipulation of objects using a light pen, including grabbing objects, moving them, changing size, and using constraints. The system was built at Lincoln Labs with support from the Air Force and NSF.

In September of 1940, G.R. Stibitz demonstrated the Model 1 computing device, which for the first time, utilized input from a teletype keyboard to papertape and presented output on them as well. This demnstration was additionally unique in that it was accomplished in remote fashion over telephone lines, something that would not be duplicated for another decade.

David Canfield Smith coined the term 'icon' in his 1975 Stanford phD thesis on Pygmalion funded by ARPA and NIMH. Smith later popularized icons, as one of the chief designers of the Xerox star.

Well, that's bit of history and now, talking about keyboard, it's once again attached just below my monitor. But, hey, there's a big difference okay? Then, keypad was attached to big furniture like computers and almost impossible job to move from here to there. It's my laptop, which is just like a thin metal book. So, this innovation is a good way to incorporate keypad right under the screen. And I don't have problem with it in anyway.. jeez :)

We are accustomed to QWERTY but there is another typing pattern called DVORAK. Dvorak keyboards, named after Dr. August Dvorak, have nine of the most used letters in the middle row of the keyboard. This allows you to write over 3000 words without the fingers reaching out to the other rows. In contrast, only about 50 words can be typed on a QWERTY keyboard without reaching out to the middle or home row.

I don't know if I should really consider 'voice commands' to control computer, a kind of feature inspired by real input device but, what I know is, this way of giving commands and controlling computer is not working because of low level of accuracy. Sometimes, computer misinterprets the voice commands and end up performing different task. Whatever, this way of controlling computers with your voice is often known as speech recognition technology.

The first Research oriented towards Automatic Speech Recognition and Transcription technologies began in 1936 at AT&T's Bell Labs. At that, most research was funded and performed by Universities and the US Government, primarily by the Military and DARPA. It wasn't until the early 1980s that the technology reached the commercial market.

Well folks, that's all about I know on Human Interface devices. If you've more knowledge on it, please be kind and let me know.

Mike said…
Hello! I love the mouse. I burned through one play too much chess online and other games. Did you know that the QWERTY keyboard letters are laid out to slow down typing speed? I read that once online. Typist were typing too fast and the typewriters use to get jammed up. So they made the QWERTY keyboards to slow down typing speed. But it didn't work. But they never changed the letter layout again.
March 12, 2008 at 9:56 PM

Navin said…
Wow, I never knew that before Mike. Thanks, I can talk to people during relevant conversation on this regard.
Thanks a lot for your update. Mike.
March 13, 2008 at 8:08 PM