By Navin March 18, 2008
Past few days, I'm not feeling real good reading news about China's cruel behavior towards Tibet and Tibetan people. As a student, when I read history about China, they have a dark history within this 100 years. They annihilated their own people which reflects how narrow-minded and demonic people are them, and their communist thinking. With the barrel of gun, they think everything is possible. I'm not against their social and political structure, but it really triggers me to write when they impose some out-of-this-word rules on innocent people.

The recent news on TV channels are very alarming, saddening and disturbing. His Holiness Venerable Dalai Lama thinks over 100 people already lost their lives but News channels are broadcasting unreal news, claiming only 19-20 deaths. May be they have their own restrictions to not infuriate the angers of certain group by providing the figures as low as possible in cases like this. But, What I think is the atrocities shall be disclosed. 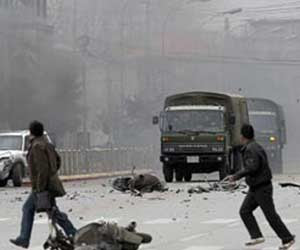 Shot from Tibet
A month ago, I heard that anyone with the last name 'Lama' is not allowed to enter China. I was too shocked with that news because, my last name is 'Lama' and I'm from Nepal but I've nothing to take and give with Tibetan politics and Chinese government. This is not yet confirmed fact but What I think is possible. Since, I've surname as His Holiness venerable Dalai Lama and I'm proud to have surname as 'Lama'. I'm not bothered if I would be able to enter China or not, but this is a real discriminatory act. That time, I felt how painful situations, Tibetan would've to go through.

China is economically getting stronger day by day. Everywhere I shop around, it's Chinese products, be it walmart or circuit city, everything is Chinese-made and this is enough to figure out, China's economy is growing much stronger. It's surprising that only 1 out of 10 products are American Made(that's my personal experience, not some real stat) out here. China's dominance over other countries is growing. USA, Nepal, Canada and India, I think these are few nations where people support Tibet, Tibetan people and their slogan "FREE TIBET" but CHINA has obvious but invisible dominance over these countries on major issues, including issue of Tibet.

Boudha, one of the major religious Buddhist destination and where I belong, is often remarked as Little Tibet. Many Buddhist monasteries and temples are around the area and mostly populated by Tibetan shops and people. I've personally seen people not talking properly to Tibetan refugees. I don't really understand, why they are not being treated good. I heard Tibetans demonstrated on roads of Boudha few days ago against China's brutal use of power. I also heard Tibetans staged peaceful sit-ins in front of UN office located at Phulchowk,Nepal. But, as a faithful dog, Nepalese police beat them up outrageously. These Nepalese government are filled with bunch of arseholes and they , to be true, don't have education degree at all. They spent entire lives in jail without proper education,and these crackpots are the primeministers and so so ministers of our country. These filthy people are ordering police to clear out protest by any means. Tibetan demonstration in front of UN office at Pulchowk, Nepal was just peaceful protest demanding, asking to raise voices of human rights against China's evil deeds. But, No, saying Nepal government supports the 'one China' policy, they took those measures. I'm sure, they don't know that Tibet use to have autonomy from China until 1949 when the Chinese communist party came to power and deployed troops to annex the region in 1951. Nepal government has said no anti-China activities will be allowed on Nepali soil that doesn't mean that they can beat people mercilessly. 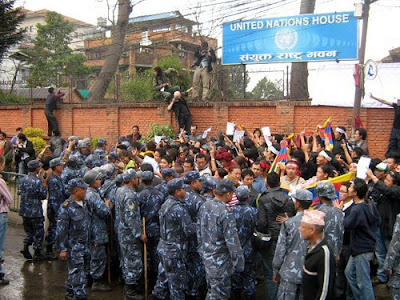 In Nepal, Police are using force against Tibetan monks 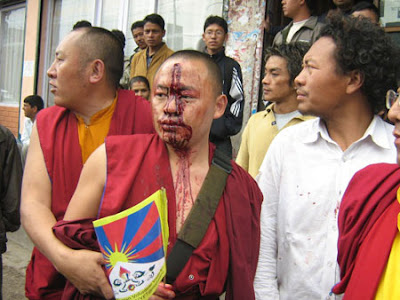 Tibetans are also protesting Olympic 2008 summer demanding their issues to be heard. You can have a look at this page, http://www.racefortibet.org 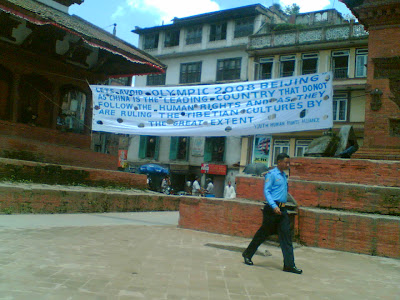 A banner in Kathmandu protesting Olympic 2008 being organized in china. Click for larger view(photo sent by Ashish)

Thank your for reading.