The car designed(60's design) by Cyril Cannell and Henry Kissack and made by Peel Engineering is just some 58 kg in weight. It's just about 1 meter long and 1.2 meter in height which looks like a small trolley moving itself. Amazingly, it's loaded with powerful engine, which drives a lot faster and gives mileage of 100 miles per gallon.

One can drive this car along the sidewalk or easily drag over the path or narrow roads just like your suitcase trolley. 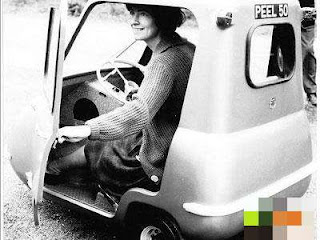 Right now, the world's smallest car named 'the Manx P50 is on display in the Peel Town Gallery at the House of Manannan until Easter 2008, and later it'll be taken back to Manx Transport Museum, it's home.

I don't know why it's not being mass-produced but definitely when I looked at it, it's one helleva mind boggling creation. The car you can carry and drag all around the place, The car which gives the revolutionary mileage and so.

The only drawback is, it's only and only for 1 person. It doesn't have space for other personal stuffs like big bags, it doesn't have reverse gear and so. It's quite amusing to see things like this, at least for me.

The following video takes you to the excitement of your dream when you see that snazzy little car driving: