By Navin April 19, 2008
Those who can't wait and jump right over the new thing, in my case, to new technology tend to regret in later time for paying high while his/her neighbor getting same product after some waiting time for far more fair price.

But there are some zealous people who wants to take first triumph. If you ask me, I don't fall under this category but there are some rich geekiest souls who usually ride high on the wagon for buying latest technology first. They are already enjoying the latest bliss. But for people like me, us.. it's best to wait and get fair deals in later times.

BLU - RAY is a next generation sensational storage technology which recently won the war on tug of war against HD DVD.

We're on the verge of entering the Terabyte era for normal desktop use. ahh , Just out of old nostalgic moments, I still remember one saying of my teacher( i don't remember his name but I do remember what he said) that while we were proud enough to use P-II as the most prized computing possession, Research Institutes and Labs were using super computing power of today in 70's. He might be right but truly, these research labs are entertaining on massive computing power than we can imagine. We, desktop users, are just about to enter in Terabyte era(while it was already being used by such research labs in 70's) when portable blu -ray medias are buzzwords. 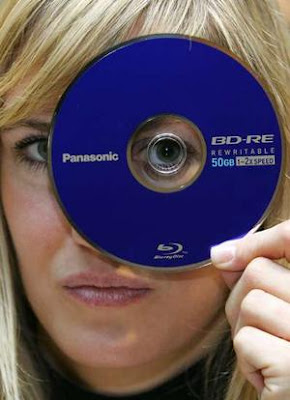 Even when Blu-ray media holds the massive amount of data than any portable conventional medias, it's no where to Terabyte era BUT, we're still so eager, because, it's so new for us. From 25 GB to 50 GB, blu-ray medias are believed to be in the scene for couple of years in coming days. Days of DVDs are numbered but we can't transfer our petty stuffs on such huge medias, sometimes, so CDs and DVDs will be used only for that purpose when a single Saved file would be over 2 GB. Imagine your Photoshop Image filesize above 1 GB, your game saves over 500 MBs,your presentation reports over 3 GB, ummm DVD will be there for these purpose as CDs are still sufficing our need for small file transfer(will write about USB flash drives in coming days). Everyday, new technology is being developed and sensational new products are coming in the scene. The technology supported by big tycoons, companies are seen as the survival of the fittest. Same thing happened with Blu-ray. Its adopted by many big companies and now, we've no other choice than to follow the crowd. Why not follow, after all, it has all good things we need. But it's
bit over priced for now.

Last time, I went to FRYS Electronics(this is the cheap and the best one stop marketplace for electronic shoppers) and there the Blu-ray movies are price-tagged somewhere around $45-$50. Ummmm. I felt quite cheaper than other cities. The Blu-Ray players are still hard to afford, at least for people like me.

Therefore, the rumors are ON. Waiting for sometime is going to bring some fortune for us. This overpriced Blu-Ray players and medias are going to drop their tags sooner than the fall of glaciers. I'm extremely eager to burn datas on blu-rays. But, for now I'll have to resort with 500 GB external(in fact I'm eager to use this external beast for my computers One Touch IMAGE backup) One Touch hard-drive from Maxtor in few days for all my backup needs. I'm heading to FRYS electronics to get this thing. Anyway, coming to the point, I don't know how movies will look on Blu-ray(must be pretty good) but writings about it are exciting me. Since Movie Industries are engulfing this as their standard storage media, nobody wants to wait long but do have to wait for sometime.

Yondaime said…
nope, the price of blu-ray discs r still $30 a piece over here. haven't seen a pirated version just yet. as always once they start selling the pirated copies, the original price will come down.

cool blog. I have 2 blogs myself and was hoping if u'd like to exchange links with me.