Recently I've read lots of hurried posts(to be precise at least 11 posts) regarding Google Chrome BETA. Few days ago, when Google released it's beta version of the upcoming Internet Web browser, it seemed to me all the communities in the blogosphere were breathing Google Chrome in and out. Most of them did the review without knowing what really Google Chrome is about. That's how I felt after I'm into this Chrome thing for few days now. Because, they didn't have that time to research.

Google released it's beta Chrome, one downloaded it, and within next five minutes he/she posted a blog review on it regarding this and that. I really got nothing in my head after reading those reviews. It was too vague to understand, different people and different perspectives.

This is a yet another blog review on Google Chrome BETA in the blogosphere. BETA is in CAPITAL because this is still not a flawless and expect to get variable ups and downs during the course of it's usage. If so, immediately report to those dudes working on it.

According to Google, CHROME is an open-source Internet Browser inviting thousands of developers from around the globe to participate in making/improving of it. When I went through their comic book pages describing why CHROME is developed, I got the clear cut message. CHROME is the next generation web browser. It's their witty attempt(even those who hate reading would end up reading comics) to showcase their manual on CHROME in comic book form. They've a perception; which is focused towards the change, change in a way we surf pages and this is the first step towards the evolution of web browser. That's what they say. They also say old web browsers are designed for surfing pages, but today people are using applications over the internet. A need for separate browser which is designed not just for surfing page but for much more multimedia stuffs is imminent. I don't know if it's their way of marketing their product to draw attention but one thing I can rest upon is whatever they do, their products are amazingly so good to be true.

Let me show you what I've to say about this new browser called Google CHROME.

I've a sandbox OS setup on Virtualization software where I test all new softwares(even malicious scripts/virus),etc. I tested it on Windows XP SP3 Sandbox.

1. I typed in www.google.com and on the very page, there was a link for downloading Google Chrome BETA. I downloaded it on the desktop. 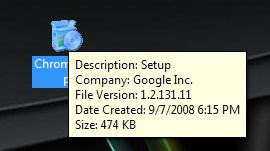 The file size of the setup file was just 474 KiloBytes. As suspected, it was the small setup-file drop requiring you to have server side installation.

2. Once the Installation is completed, I followed it's cave where it was located. 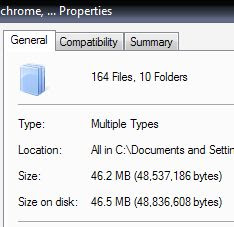 Without helping it build any browser/cookies cache, I quickly checked it's file size and it was about 47 MegaBytes.

3. Next on, I started playing with it, noticing new things every here and there. Interface is totally improved, lots of new concepts are incorporated which I shall be discussing on following paragraphs. Thank god they've blue title bar by default and it's my best color. 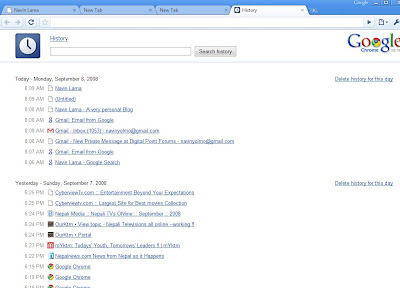 Their history page is very intuitive and easy to use. Click this image above and you'll know what I meant.

4. Next on, I tried downloading something(IrfanView). Gracefully, it was a zip-zap and found that the download details were on the down-left of the browser. From where, You can execute the downloaded one or just open the location where it was stored. 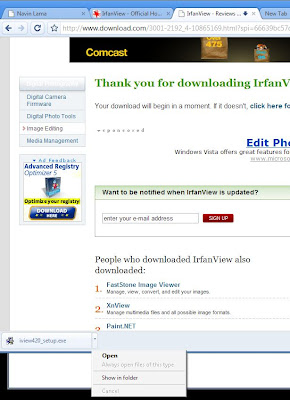 This embedded download log on the down-right of the browser is very neat idea. I truly liked it.

5. One very handy feature of this browser is Incognito Mode. I looked on the dictionary for it's meaning and it was something related with 'stealth, concealed'. 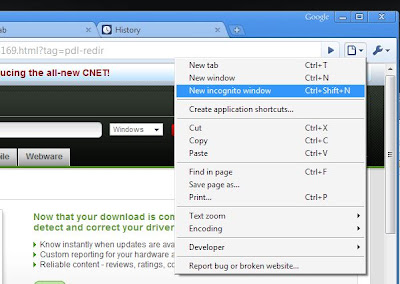 As soon as I clicked the 'New Incognito Window' from the option drop-down located next to address bar, I was brought to new window page. When I read their first lines of brief intro on what this 'New Incognito Window' would do, I was momentarily excited if Google has made anonymous surfing possible with zero effort from user side. But as I kept reading, I found it's not to anonymize the online surfing but to uninstall all the websites history/cookies/caches as soon as I would close this tab.

I would recommend this feature if you are on your friends computer(if they have CHROME installed) or if you don't want your family member to figure out what you did online. This is the automated feature because you don't need to manually clear up your traces. Google made life easier. 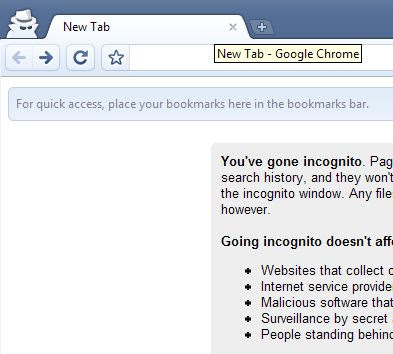 One thing that I noticed was that top-left invisible man image on 'New Incognito Window'. That was another reason I ended up thinking if it's the invisibility from server side. I was wrong. It's bit tricky out there. Google could have come up with different image for that purpose rather than using the same image type which has been used by IP-Hiding softwares all over the internet. They are for invisibility or say complete anonymity from server-side perspective unless someone really bothers to dig in about the whereabouts. Whatever, this Incognito mode saves time. 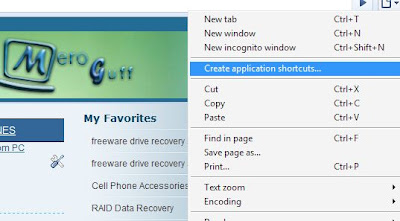 The purpose of this 'Application shortcut' is the faster launch of your favorite sites. If you've a special sites like gmail,hotmail,youtube or any other sites, that you think is important to you, you can make shortcut to those sites and when you do that it'll be saved on your desktop like other application shortcut.

I wanted to create shortcut to my blog www.navinlama.com. I opened up that in the CHROME, and selected the 'Create Application ShortCut'. Next screen was something like below: 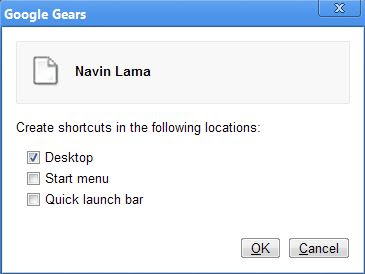 Since, I wanted it only on Desktop, I selected the Desktop Option and clicked OK.
Now, I don't even have to bother opening CHROME. Just double click that shortcut and it'll promptly open up giving you full view without any of those toolbars and any other bars.

7. Another addition is it's own TASK MANAGER. I'm not talking about Window's Task Manager but Chrome's Task Manager. When I was playing around with it, I discovered that there was a TASK MANAGER on the shortcut menu as I right-clicked on the Title bar of the CHROME. 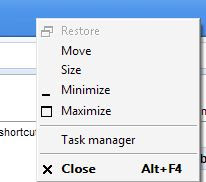 When I clicked 'TASK MANAGER' from the shortcut menu, I was shown the following screen. It looked like CHROME was eating altogether 52 MB of the TOTAL RAM. 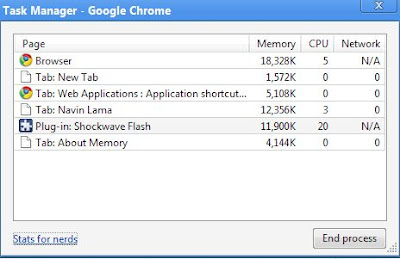 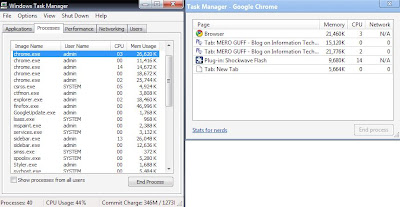 Even if it's faster in browsing, it was consuming lots of memory. May be it's a bug or needs some tweak around, but considering computer with loads of memory packed in these day, it could be excused. What about old system, people coping with 256 MB or 512 MB RAM, it's better for them to understand, this next generation browser is definitely not for old generation system.

If you are discoverer by nature, you would discover bottom left link called 'Stat for nerd' on CHROME's Task Manager. Click there and you'll see something like this below: 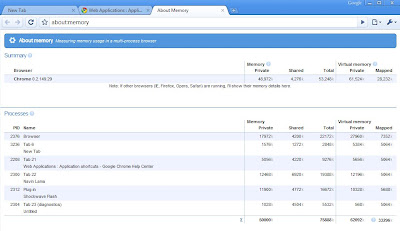 Extensive view on memory usage, but still I don't believe this stat for some reason, umm till the time they release the final version.

8. I liked one cool feature of this browser. As soon as you press CTRL + T combo or launch new tab, you'll see the most visited sites listed on that new page instead of blank one which we are used to of. Isn't that cool? 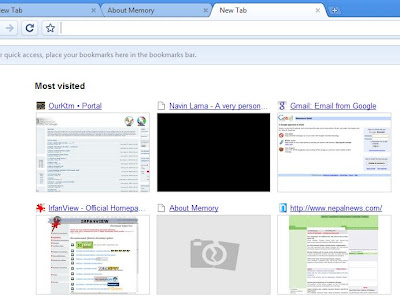 9. If you've bookmarks/favorites from other browsers alike, you can easily import them. 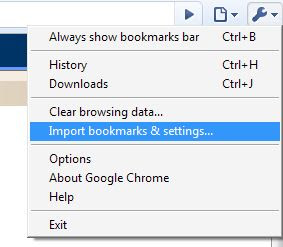 Click on the far right drop down(with tools icon) and select the 'Import Bookmarks and settings' and rest is easy as 1-2-3.

10. Writing about this bookmark thing in CHROME, it's quite intuitive.

As you visit some sites, you'll see the transparent small bookmark icon usually represented by 'Star' icon in open source browsers. This time, it's just next to where FAVICON sits.

Click the Bookmark 'star' icon, it'll turn into fabulous yellow, type in your customized Bookmark Title or you can leave as it is, and hit the CLOSE button. That's it, your bookmark is saved. 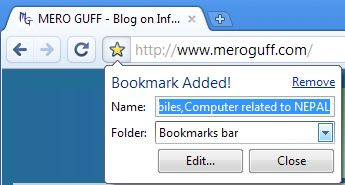 Now accessing those bookmarks are even easy. Google Chrome has completely taken over the concept of BOOKMARKLETS and implemented it on their new browser. Bookmarks are just below the web address bar in Chrome. The concept is same but this is the most smartest way. Just click those visible bookmarks and you're right there on your favorite site instantaneously.

Hence, these are my experiences with Google Chrome BETA. I didn't want to compare it neck-to-neck with other browsers because that would be shameful act since we've come so far surfing net on those browsers and now diminishing their usefulness wouldn't be ruthful.

These are the reasons to step over to new Internet browser called CHROME. But CHROME still has few bugs. Like when I tried to access the blogger page, It gave me the error message something like below:

It had all cookies/JAVASCRIPT set to ON but still for some unknown reason, it didn't work at one go. I had to shut it down and on next restart of the browser, it worked.

During your CHROME experience, if you see something like this below: 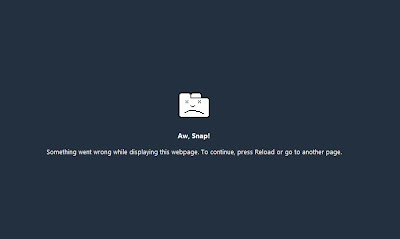 Forgive them, it's still in BETA.

There are many sites, which weren't rendered properly. Hopefully, final release will solve all these problem. CHROME BETA is forgiven on this regard.

Also, there are some multimedia sites, it didn't work with. I've not yet experienced any crash and very eager to see their claim that each tab has it's own process running, and killing one tab wouldn't affect the entire browser. Which means, for some reason, if the browser crashed(I mean if the specific site caused the crash), only the tab would shut down, not other tabs opened. This is one dynamic approach and this really proves genius-at-work.

I highly recommend CHROME for next level of internet browsing experience. One more thing, it supports plugins/extensions. This was just a barebone review on CHROME BETA.

I think, some bugs will be fixed soon.......
and another thing, google have to add some addons or something like that..

They've native support for plugins.. but I think addons will proliferate after it's final launch.

The browser has much created a hype since it's released by Google. I too have read many posts regarding it. Some of them you can find on my blog.

Hem bro, sorry for late reply. Thanks for your words. I appreciate that.

Become a Smart Techie, You've got a wonderful blog. Keep it up. Enjoyed your latest post about OpenOffice 3