By Navin September 18, 2008
Humankind hasn't reached that level of the knowledge where it says how Universe is created. It's beyond our imagination. As said, ignorance is bliss, we often time tend to take help of fantasy,engulf ourselves into beliefs which are totally baseless. But to some extent, when Science doesn't answer every bit of queries, personally I also rely on such beliefs.

One thing, when I used to gaze upon the creepy starry night sky lying my house rooftop, I always wondered what's beyond that black curtain of night sky. To find the answer, I read many books and asked many times to my science teacher about this. It was really disappointing that they didn't have answers either.

But there is a theory, which later on, I think that I'm enlightened with, says Universe is started with dense form of atom. I don't have the in-depth idea but this term was coined as big bang. Big Bang happened and ever since, Universe is growing, ever expanding itself. Scientists don't have answer how and where that started, they just give vague explanation as somewhere in infinite time in past.

Based on this scientific time-tested theories, a week ago Scientists in Switzerland passed on an experiment. This experiment was set to simulate how Universe is created. Personally, I think they are mad scientists trying to act as god or say universe creator. Whatever they've got in their mind, they just want to test how stuff works ignoring the outcomes on which they're not well-prepared and they don't even know what to do if consequences turn negative. I'm reading their press conference news online which says nothing is gonna happen, it's just come and go thing. 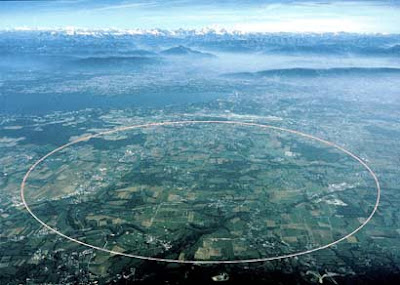 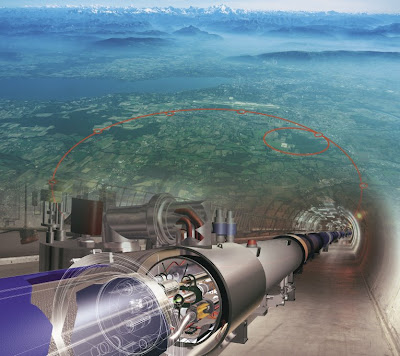 These two images above show how big the underground tunnel is and what those scientists are really cooking up. The beams collided at massive speed and the experiment is still on: CERN,Switzerland

They've put years to build these machines called Large Hadron Collider, where beams are collided, particles are de-atomized and simulates the theory on how Universe was once created. What if this experiment went wrong, their press report says, it went successful but some of the critics says the bi-product of the experiment already has dug a hole into the earth's core. Black hole has formed. May be it's my ignorance to write like this without knowing what went there on the scene but It really freaked me out when I learned about the fact that they've put United States and some other countries into 'observer status' to avoid any kind of interference.

These words that I've written here could make many of you think that I lost my mind but seeing so many strange things happening and reading leaked materials online, which I believe is not a hoax are enough for me to believe strange and out of understanding forces of nature and this galactic universe.

When I read this news, I promptly recalled the villain of Spider-man 2 where the mad scientist conducts a fusion experiment to create a new form of energy, which goes unstable and creates havoc. Then all of sudden, Superhero Spiderman solves the problem before it could engulf the entire Earth. For God sake, we don't have super heroes like that in real life to save planet from disaster. 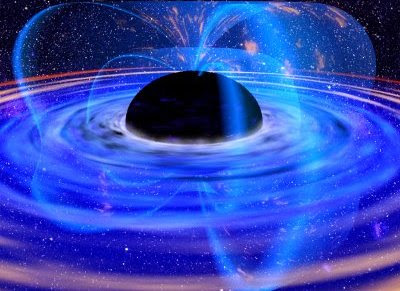 If black hole engulfs everything, our brain and sense of thinking would be traumatized with the extreme gravitational pull that in the matter of seconds, we would be vanished without any pain as if nothing happened

But this is happening in real. Some mad scientists who believe that everything is in control and in their hands are putting effort on creating universe on Earth's surface. If it's as true as Big Bang theory, it's gonna suck up the whole Earth. They are taking it as fun, damn maddies. They are creating black holes by destroying small form of stars into their experimenting tubes. The experiment is ongoing since more than a week. Their research could lead to the destruction of human kind. They should be stopped immediately. If this black hole things happened for real, we won't be able to figure out a second earlier to it that we really existed.

Government is silent and as oblivious as always. They don't really want to create a mass panic by disclosing all real truths. But, at least we should be readied for what's coming and what's going on.

I'm really worried when I read this news on papers.

Check this video below to find out how those people have made this thing to simulate the creation of UNIVERSE.

Why do you think they are mad scientists trying to play God?

I think we should probe both nature and our own minds. Our ancient rishis realized that it was the way to get closer to God.

Media tries to sensationalize everything. I dont think we should read but understand that much of it is meant for entertainment rather than serious consumption.
September 25, 2008 at 11:48 AM

Unknown said…
Dude, seriously. This is pathetic. You really should have studied more about the LHC before making a random article on it on this technology blog. This is by far the biggest physics experiment (may be after NASA) and it is supposed to uncover certain mysteries of physics because new discoveries in physics can no longer be made without large scale experiments like this. And black holes cannot be formed so easily. As for hypothetical mini blackholes, they'll disintegrage instantaneously with Hawking radiation.
Next time do cite some reference before claiming some hypothetical end of the world theory.
And as for technology being a boon or a curse, it is completely dependent on your perception and yet again THE LARGE HADRON COLLIDER WILL NOT KILL THE EARTH. As a matter of fact, human knowledge hasn't come that far to end the earth. Nope, large scaled nuclear fusion will not end it(it might however end our race but it will not end the Earth). However, if some black hole gets formed out of magic, it will not hurt, we will get disintegrated way faster than the electrical impulses reach our brains.
September 26, 2008 at 12:31 PM

Navin said…
l. venkata subramaniam, I agree with your idea on not believing whatever media writes/says about. But, some of these so-called scientists are fooling around with nature in the name of research. They should spend time on researching new medicines that could cure AIDs, aging,. They should spend time on developing new technology that would ease lives and saves energy. Instead, they are researching how the destruction/construction of universe took place. I would advise you to Read about blackhole

bin4y, I didn't get what your view is about. At first, I felt you were opposing my views and ridiculously, I felt you were supporting my article at those last words of yours.
Whatever, the LHC could be dangerous.
October 15, 2008 at 12:08 PM