By Navin October 19, 2008
I'm not sure about that(question on this post title) but whatever it is for now, it's surely creating lots of buzz. Some said, it's a big brother of iphone in terms of usability and some even said it's an iphone killer. Till now, iphone has been the most prized possession for mobile phone fanatics. I really didn't fall for Apple's most marketed item call iphone. 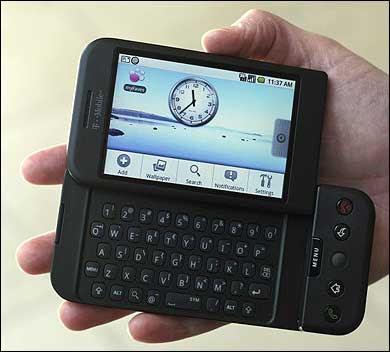 Now, with the recent launch of Google Android phone marketed as G1 phone, I'm so happy that we've choice other than iphone. Moreover, there are so many reasons to be under contract with G1 than iphone.
-iphone ripped off first lot of their consumers.
-iphone sells most of it's softwares/plugins at ridiculously high price.
-iphone overhyped the touch-screen technology than it really should. It boasted as if it is the first one to research and develop the touch screen. Many still believe Apple developed touch screen which is false.
-iphone divides it's customers into high and low class
-..and so much things that I'm still unaware of..

Sure enough, I'm gonna jump on G1 pretty soon. Google has tied up with T-mobile, another cellphone service provider in here, just like iphone Tied up with AT&T.

To talk about Google's Android enabled phone G1, it's powered with an operating system called Android(developed by Google). Android is an open source operating system for T-mobile's HTC phone where developer from around the world can contribute to make it better piece.

If you are a developer and wanna give it a try, download it's recent SDK here:
http://code.google.com/android/download.html

There are couple of reasons to choose G1:
-first of it's an open source.
-it's not an iphone,with what I've seen and read, it's way superior than iphone.
-developers can contribute softwares and applications to make it better experience.
-it eliminates the previous cell phones limitations.. now, even if cell phones get lost and destroyed, all the stuffs inside the phone can be instantaneously backed up on new G1.
-multimedia is outstanding.
-Truly internet on your hand when you own this piece.

For fantastic intro about what it is, check this link.

And, I found couple of interesting videos. Check them out below:
Unboxing G1

All the videos above are from phonedog

To answer the question of this post, I'll have to wait for a while. Will be back with an answer in coming days. For now, I think this is really something.

S Kafle said…
This is a great blog.

I have created a Nepali social bookmarking site like digg.com. Its goreto.co.cc . You can share your blog posts on this and get more traffic to your site.