I never really cared about political issues because that really didn't matter us. What mattered was only to the leaders and nothing much. But, with what I've seen in America, I found that the whole story is different. Leaders are absolutely accountable towards the general public issues, esp Democrats. I'm not being biased favoring my article towards Democrats. I'm writing because, that's what I felt, saw and read.

Republican would've never thought that their attack on IRAQ would bring curse on country's economy. If it would've been like what they might have expected, then, time now could be seen favoring them. But their bad luck and the unluckiest decision, which led their name and fame in mud. They are American too and they don't dare to think harm of their own country as some people allegedly accuse them because war on IRAQ went way more costly than expected. As such now, the tax which could've been used in developmental works and wonders building, is being used solely for bombing and destruction. This is the result of bad decision.

Since I lawfully work here and paying taxes faithfully, it really matters to me how am I going to be governed. I don't want to be governed by irresponsible leader whose decision could lead our hard-earned-paid taxes to go in vain. I think this is the one thing which all people living legally in this country must be thinking right now. It really concerns them which leader to choose.

As an independent bystander when I've had no idea which party is great or less, I used to think that at least I had known something about how politics work here. But, during this whole year living here and after some researches, dealing with different people both Democrats and Republicans, biased TV news channel and so, I came to some points of conclusion.

This is the perfect time to show myself where I stand. I'm not being politically inclined or anyone who says politics is bad game, they must at least think once that people out there are the one who makes policy, the policy directly/indirectly relates to everyone's daily life. So,ignoring politics is nothing but a foolish act.

I don't have my right to vote for now but with heart, I've been telling people and my family to vote for OBAMA as the next president of the United States. He is the one who talks about general issues which concerns you and I. He doesn't talk and favor riches, he talks about people from footpath to people working day and night. He really is concerned about you and me. He was right in many facts that he has presented. To me, he is a brilliant visionary leader of the United States. Not having him as the next US president is nothing but the worst omen in the way of peace and prosperity.

I think the next US election is not very far, it's not even 2 weeks away from now. My father is away from this country and I'm letting him know and strongly urging him on daily basis to be on time to VOTE FOR OBAMA. That's before November 4th.

Whatever, I'll be voting OBAMA for his next working period, that's I guess after some years of his presidency(well, I'm damn sure, he's the one to be selected as one). (There is something wrong with this blog, whatever it says and predicts has turned out to be true during it's off-beat gossips and posts.)

The final presidential debate was both good and bad. Good because, Obama was confident than before and more focused whereas McCain did nothing but blaming,accusing and stealing Obama's own words to attack him with.

As soon as the final debate ended, a quick look on their debate result on the very next day took me to pages where people favored OBAMA with outstanding figures.
For example, a survey conducted by Guardian showed OBAMA won the debate with huge difference. 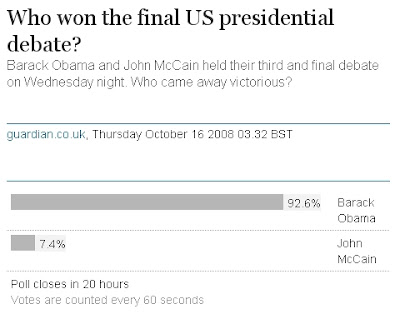 Astonishingly, a poll conducted by FOX News showed something like below: 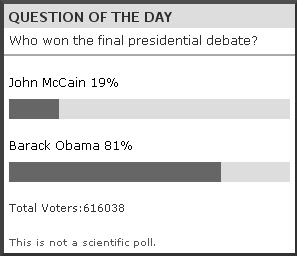 OBAMA won the debate. What's up next? 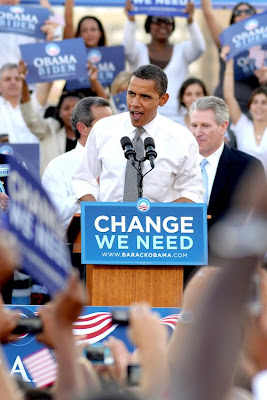 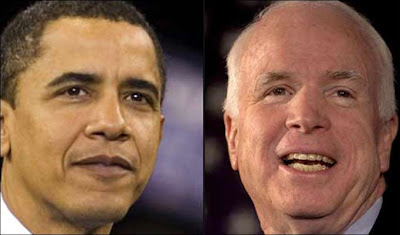 Lots of psychologists,educators,body language experts have watched these two leaders and closely analyzed them in different time frames and conditions, and they've concluded that Mr. OBAMA being very true to his words than his opponent. Obama is very firm and determined. Read his face and body gestures, try to figure out what he is upto and help him build this great nation.

I found on one newspaper some interesting facts regarding the president's team-up. Like Obama-Biden and John-Sarah tie. This finding is based on their numerological blueprints.


Summary of the Democratic Team

Barack and Joe are very in tuned with each other and are truly a perfectly matched, skilled political team. They share the same Destiny, Purpose, Life Goal and passion in life which is to serve mankind and bring about prosperity and equal opportunities for all generations to come. These are men of action as proven by their record in office.

You can always tell in individual by their behavior pattern and actions as opposed to what they say as actions speak louder than words.


Summary of the Republican Team

Secondly, their individual priorities are completely different. Sarah's priority is herself and being in the limelight while John likes the limelight too but focuses his priorities on home and family, not the world. Sarah is a master communicator and sharp shooter who loves the kill while John is not a leader, does not see the big picture, and avoids confrontation at all costs.

Neither Sarah nor John have the kind of disciplined, logical mind for thinking through or solving the kinds of complex issues facing our nation and world today that one would hope to rely upon in the leader of our troubled nation.

Their blueprints do not show either one of them as independent, innovative, original thinkers with fresh new ideas. Sarah entertains at any cost and John analyzes minutia. They are opposites in how they are wired and think.


To get little off track, there are many influential figures backing up OBAMA. Celebrities are in front:
Ben Afflick
George Clooney,
Oprah,
Beyonce,
Julia Roberts,
Jennifer Aniston
Robert De Niro
Chris Rock
Samuel L. Jackson
Scarlett Johansson
Caroline Kennedy Schlossberg,
Shakira,
Hulk Hogan,
Jennifer Lopez,
... and the list grows.. (my blogpost will be cluttered with all those list if I continue)

Who else, the computer Genius and the Great Humanitarian Mr. BILL GATES supports OBAMA campaign.

Even the republican thinker/adviser Collin Powell thinks/endorses OBAMA as the right guy for the next US President.

Recently, 61 Nobel Laureates in Science Endorsed Obama with their signatures and statement on their website. To my knowledge, I've never ever seen such numbers of intellectual people endorsing for any president.
Read their statement here.
These genius can't be wrong.

Who do you think should you vote? Don't be a stupid, use your logic and vote for OBAMA. To help them with his campaign, if you could, contribute a little. I donated them as per my level of income. You can donate too. Go to barackobama.com and help choosing right person for right place.

I was just a mere observer who now thinks he's the right guy for this country.

well in my eyes both are same. I dont expect anything less from McCain. He is also american he will do everything to make his country better. This is just power game.Obama is just cleaver and he has placed himself in right place and at the right time, thats all. Had he stood against bush 10 years back he would have lost, im sure nobody can disagree with me on this one. We have always seen politicians talk big so i am not suprised. Its just obama can express himself better and can fool people thats all. And the republican can't put there best man in this election because they know they will loose this year so .. they have picked mccain as a scape goat.This is how world works. whoever wins, if we sum up the whole comming 5 year. Things wont be that different, trust me.

the part about mcclain being a scape goat i want to take it back. sorry for that i didnt see the last debate thats i had secound thoughts i only saw obama's campaign advertisment in which they have made mc clain look like a loser which you find it everywhere in the net now a days. i saw the last debate now i dont think mc clain's plans are bad. They are practical infact. He is a good guy. He speaks for his country. And he is definitly not mr. bush

First off,Mr. McCain seems only focused to big business and corporations, even if he makes up stories to cover middle class and low income family issues. I don't believe him. He is under influence of Mr. Obama's speech. Just talking like Obama has become his recent habits. I think it's to draw attention of crowds towards him and confuse them. I'm not confused though.

The final debate was on Obama's hand. You can check WWW for result and indepth analysis.

McCain's words 'he's not bush' is true. Because, he's McCain but he'll continue bush's saga. That's for sure. I had supported Bush's step when he attacked and promised Americans to kill 9/11's masterminds, end the terrorism. He couldn't, but instead misused billions of dollars of tax money on wars, he's uncapable, worldwide economic regression.. because, trillions of dollars are being spent on wars. Somebody has to stop that. Obama is that guy. Nobody here wants to see the continuation of this government except rich and big corporations people who don't have to worry about paying taxes.

Shrawan, you should really talk to as much Americans as you can. They know better than any other media hypes and online AD campaigns.

I support OBAMA, there is a reason.

Anyway, thanks for your words.

If American are supporting obama then he will win. i really don't care whoever wins. I cant even vote. its just i don't think mc clains plans are bad.if they think obama is the savior then be it vote for obama.