By Navin November 05, 2008
UPDATE: Barack Obama won the 44th Presidential Election. He won by 349 electoral votes and still counting from other states at the time of writing these words.

One very notable aspect of this election is he's the first African-American President in the American history. I could hear lots of fireworks right now. People are cheering and getting out for winning parade. California is favored by more than 90% Democrat voters. 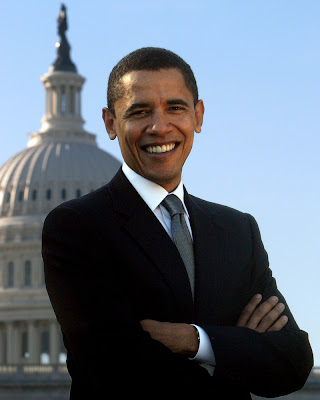 meroguff congratulates Mr. PRESIDENT BARACK OBAMA for being next President of the United States of America. 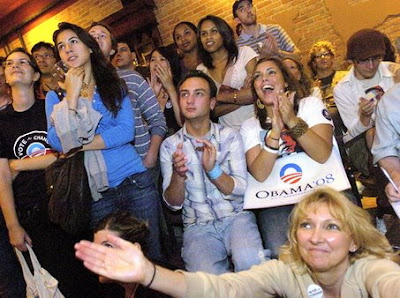 "US Presidential Legacy" is what this Video below shows:

Obama is one the most influential president that America has ever seen. He touched my feelings(and millions of others) when I saw him talking on TV. I really never cared before because other politicians talked which I never understood and it was way sophisticated/lie. I always ignored them. But Obama always talked about problems of general people and ways to solve them. He advocated for everyone. His plans are so inclusive that he even won all of the immigrants heart. These immigrants are the people who will make tomorrow's America. I still remember US consular giving us orientation speech that America is the country of Immigrants.

Obama is the first ever president to take Internet under his advantage. He utilized internet as well for all of his campaign and it's goodness of Internet that I could donate for his campaign couple of times. I'm feeling so good just as his mail stated few days ago. I'm feeling good because he wrote that I would be the part of this victory. YEAHHHHHHHHHH I'M PART OF IT.

Majority of people weren't wrong, Majority of them weren't fool, so OBAMA wins.

I'm about to head to Grant Park to talk to everyone gathered there, but I wanted to write to you first.

We just made history.

And I don't want you to forget how we did it.

You made history every single day during this campaign -- every day you knocked on doors, made a donation, or talked to your family, friends, and neighbors about why you believe it's time for change.

I want to thank all of you who gave your time, talent, and passion to this campaign.

We have a lot of work to do to get our country back on track, and I'll be in touch soon about what comes next.

But I want to be very clear about one thing...

All of this happened because of you.

Democrats won by 61%, according to my blog
One of the weirdest thing for someone like me who've grown seeing third worlds politics,is American politics and it's way of choosing the President. When I closely observe it's actually not the popular votes but the electoral votes that selects the president of the United States. I was totally shocked when my teacher Peggy told me once about this. In my country, it is the mass votes which select it's nation's leader. Things are different in here.

Lets make an assumption, if there were a huge votings in Oregon than in California and majority of voters(almost 99% of the population) in Oregon voted for republican candidate than in California(say 40% of the the population voted Democrats). Oregen has only 7 electoral votes. Counting numbers of voter in Oregon would be almost double than of California but what happens is California actually takes the badge of the victory because of it's electoral vote counts. This is just a mere assumption but this is how American Politics work. Popular votes don't necessarily help candidates win the election, it's actually the Electoral votes.

Check the image above, you don't need any other words from me to figure out which states are playing main role. California,Texas,Newyork,Florida,Ohio are the states with huge electoral vote counts as compared to others. So, it is significant for any candidate in winning these states.

Lets see what's there for tomorrow. Blue on Electoral maps represents Democrats whereas Red, represents Republicans just in case you're overflooded with those specs on your TV News channel and wondering what it is all about.

Navin said…
Hem, that was a good assumption but many Americans thought she was not yet ready to become their president. So, she lost undesirably.