By Navin December 05, 2008
Long awaited GRAND THEFT AUTO IV for PC is finally available everywhere. It has been getting sold on store and online from the start of the last week of November 2008. Before the due date, I was reading many speculations about it's launch and have seen many online stores taking pre-order sale for this game.

What makes this game unique is that it's extremely playable with unique graphic engine that any gamer could ever imagine to fondle with. When I played GTA 3 San Andreas, I was thinking this is the ultimate game of the games. I was right, it'll take you to drag-racing like experience to third person rampage around. This game tries to mimic the real life of one person in virtual world where extremely off-road experience, off-route mission and roaming around yet still so playable without any compulsive mission goals to follow makes this game a favorite time pass for many gamers. 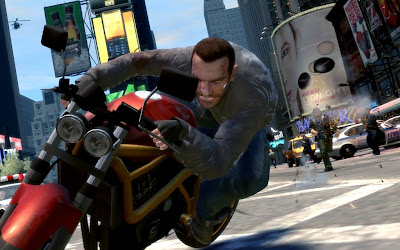 When I finished GTA 3, and during detour in real life, many scenes from the game looked and stood like right in front of my eyes in real life world. That's how crazy real and awesome this game is. It'll make you believe things around you is right there in the game.

Rockstar, the publisher of this game, has option to sell this game online too off their selected networks but I envy those great manuals/posters and other real hard-cased stuffs that comes with the shipped order. The console version of this game when my brother ordered came all with those stuffs. It had separate DVD about GTA IV besides the gaming DVD. The map poster to figure out the locations in game. Whoa.. that was something I had never seen before. So, even if Rockstar has option for one to download this game, I prefer to order it this Chrismas holiday ...discounted rate. 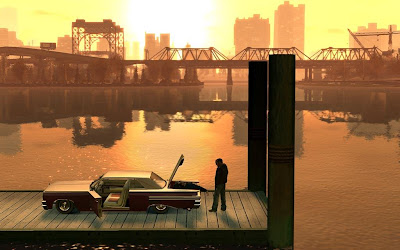 I really felt secluded when they released the console version first, it was XBOX 360 version. My brother was playing it on XBOX 360 and I was just looking at all those wonderful graphics, great storyline, vibrant character animations which looked so real. I was waiting for PC port. I don't really like playing it over console , the only reason being, I couldn't do anything except playing. In PC port, I can hack every thing possible in the game. That's why I've always been sorta PC gamer and stand for PC gamers league against Console gamers league.

Game companies usually release the PC port at last. In my opinion, it's because, they want to achieve high profit margin from the console version of game sale first. Obviously, it's because they are rare to get cracked(which means violating their warranty modding their console and most people don't want to take a chance) whereas for PC game, it's almost cracked and distributed all over the internet as soon as it's released. This is the most possible reason for these companies to set back and release the PC port at last. 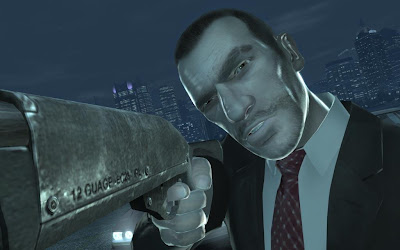 Niko, the character, is all about GUN and Violence.
As I said, GTA IV is extremely high-end graphic wise, detailed textures, great lighting and life-like atmospheric conditions are some of it's attributes this time. It's far more superior than it's predecessor in terms of look and play. With that said, it's definitely demanding more CPU power and high-end graphical behemoth. I'm hopeful that my 9600 GT/Core 2 Duo CPU could handle it's demand. This time story is centered around a guy named 'Niko'. Player can roam around wherever he could see with his character's eye in the game. This game is all about 'grand theft'. So, it's extremely violent, graphic in nature and definitely not for young minds of minors. 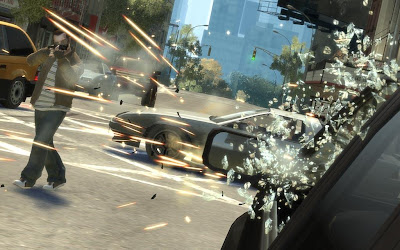 It's gonna be fun playing this game with all those online multiplayer options for some multiplayer fun altogether.


Thanks for reading my post.
All images reserved to Rockstar.

Anonymous said…
After completing GTA: San Andreas I have been waiting for this game to come out. But right now it looks as if this game will not be supported by my pc. :(
December 5, 2008 at 3:50 PM

deck said…
Did you take all these screenshots on your machine? I ask, because they look pretty good, and I've seen some user taken screenshots which pretty bad. Even Tom Chick a gaming journalist who reviewed the game professionally only played at 1024x768 which is ridiculously bad.
December 12, 2008 at 12:47 PM

Navin said…
Ashish, this game demands very high processing power both in CPU and GPU
But, I'm running perfectly fine on my system , the only problem is my Logitech gamepad is not working on it