By Navin December 10, 2008
This morning I read a bizarre news. Indian Court passed a statement to ban Google Earth. The sole reason being it's use by those terrorists who masterminded the plot of mumbai attack which killed more than 180 innocent lives and leaving hundreds wounded. 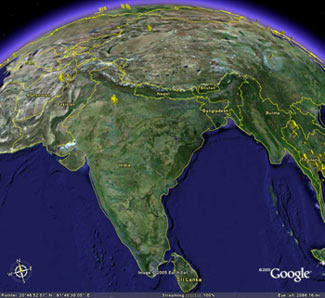 As stupid as it sounds, the silicon giants India bans Technology Backbone for a reason which is not only baseless but hypocritical. Their incapable intel is to blame for all these massacres that took place rather than pointing fingers at the mediums being used.

I agree that some sensitive maps are to be dealt in a way that it's not publicly available rather than cursing/banning technology. I've sympathy to those families whose near & dear died during that incident.

deck said…
Yeah, this is a pretty stupid ban. The terrorists used boats to travel to Mumbai, right? Ban boats! Did they use cell phones to communicate with each other? Ban cell phones! As you said, the Indian authorities had poor intel period and are just casting around for someone to blame.
December 12, 2008 at 12:50 PM

Navin said…
wankongyew, they lost their mind. it happens during accidents. it takes time to recover.. let's wish they don't step on wrong moves which looks pretty imminent.
December 12, 2008 at 1:13 PM