By Navin January 28, 2009
Five Desktop and Laptops in a row to fix(already fixed and source of my inspiration to write this post) and all with the same problems. These all systems were infected with 'genuinely fake' Antivirus software.

All these naive and technically ignorant people got pop-up warning out of nowhere which indicated 'Your PC is Infected with Virus' sort of messages. Had it been just the pop up messages, they would have ignored(I assume) but the messages kept coming up from within the browsers and taskbar just like 'Windows Security Alert System' does it's way. Frantically, they installed it unknowingly giving the open invitation to more problems. That more problems urged them to buy their software. And, just like an enslaved one,they used their credit card to buy useless crap spending over $100 dollars. Despite their stupid spending, they got nowhere. That was total rip-off. And, that's when they seek help of people like me. My first note, if you don't know what you are doing and suspicious about over acting PC, just give a short call to your nearest technician. That would be the smart step and will save your money.

There is a recent spike of this fake antivirus software called 'Antivirus 2009'. There could be many variants of this particular threat posing with different names and make of same character. 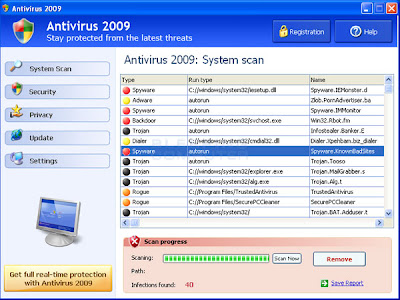 Once installed, it does everything at it's own and shows fake threats almost unimaginable. My fresh 'XP sandbox install' detected more than 100 threats using this rogue antivirus, which could have broken other's heart easily. As it's as easy as knife on a cake to install, it's as hard as breaking a rock to uninstall this crap.

First up, if you see any pop-ups don't be gullible but act smart. Don't click even if your intuition says you to click. Give a call to your nearest technician if you don't know what it's all about.

Second, well, if the system is infected, I've already written a post how to remove all those crapwares.
(I've written about other sort of virus removal in the following link, but the program is capable of removing many variants of malwares including this 'Antivirus 2009' virus)
Follow the link here to remove Antivirus 2009 virus itself.