By Navin January 18, 2009
Circuit City, one of the second largest electronic stores in USA, officially announced on Jan,16 2009 that they are going out of business and immediately closing all 567 stores across the US over the weekend. Their Canada based Stores will operate unaffected though. 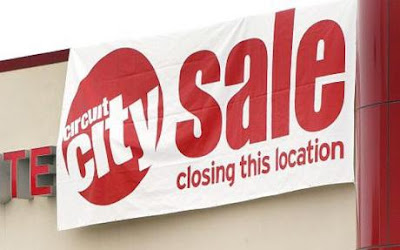 Circuit City filed bankruptcy nearly a month or 2 ago, and now finally reaching it's death.

I never bought a single item from their stores whenever I visited them because every item was over-priced than any other stores. I was questioning myself then, how this store was sustaining despite high price-tag. Never knew the reason but the consequence is right in front. They failed to study the market.

If anyone has got a Circuit City gift card, it's a good time to use it before company disappears. One can use their gift card during the liquidation process otherwise, it would be priceless afterward.

Circuit City has clearly stated on their site that all the items will be sold on clearance rate which means, buyers will get some 20%-30% off. During the peak of clearance sale, it could go upto 50% off. So, it's a best time to hunt down for your favorite electronics but one thing to keep in mind, they'll be without warranty.

34,000 associates will be jobless because of this liquidation. This is really a bad news.