Everyone who surfs internet should learn this

By Navin February 25, 2009
So many people still spend hundreds of words in emails trying to find meaning of the chat/online/net etiquettes that we netizens use often. Some similar incident happened to me lately. Someone in this universe of internet, whom I met online, came to me first asking about the words that I posted online, of course somewhere online. It was just regular online etiquette and believe me, it was so stupid to continue arguments with such people. That's how I realized after several exchange of conversations. Finally, that someone somehow admitted ignorance about these terms and showed some interest to learn . I would've taken it positively if that someone would have shown some interest to learn but instead kept arguing with me and that really pissed me off.

Posting same ages old etiquette which I believe should be learned by every net surfer or everyone who is reading these words online. Just to escape from being lost, you can give it a try.


AFAICR/S/T - As far as I can recall / remember / see / tel
AFAIK - As far as I know
AFK - Away from keyboard
ANFSCD - And Now For Something Completely Different. Used to change the subject of conversation.
ASAP - As soon as possible
ASL - Age / sex / location
ATEOTD - At The End of the Day
ATM - At the moment
AWOL - Absent Without (Official) Leave
AYBABTU (also abbreviated as AYB) - All your base are belong to us (from the video game Zero Wing)


B2B - Business to Business
B& and/or B7- Banned
BBIAB - Be back in a bit
BBL/S - Be back later / shortly / soon
BCNU - Be seein' you
Blog - Also known as web log or an online journal
BOFH - ~censored~ operator from hell
Bot - Any type of automated software in chatrooms and web-cataloging software
BRB - Be right back
BSOD - Blue Screen of Death
BTDT - Been there done that
BTW - By the way
Bump - Increment (For example, C's ++ operator.)or a backronym for "Bring Up My Post"


Crawl - To retrieve a web page along with the hyperlinks that reference it
Crapplet - A poorly written computer application
CU - See you (later)
CYA - See ya OR Cover Your Ass
Cyber (prefix) - A term used to connect the subsequent word loosely to the world of computers or the Internet or sex over a computer
Cyberspace - Virtual reality, the Internet, the World Wide Web, and other kinds of computer systems. Science fiction author William Gibson popularized the term in his novel Neuromancer. Gibson used the word to describe a virtual world of computer networks that his cyberpunk heroes 'jacked into' 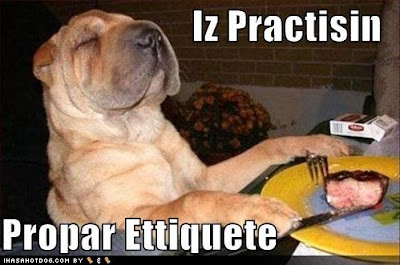 
DFTT - Don't feed the trolls
DGAF - Don't Give A ~censored~
DIAF - Die in a fire
DILLIGAF/D/S - Does it look like I give a flip / ~censored~ / damn / shit
DND - Do not disturb
DOA - Dead on arrival. Refers to hardware that is broken on delivery.


EOF - End Of File
EOM - End of Message
EOL - End of Life. Device or hardware that is at the end of its product life cycle.
EQ - EverQuest
ETA - Estimated time of arrival


FAQ - Frequently Asked Question(s)
FFS - For ~censored~'s sake
Flamer - Someone who makes inflammatory, abusive or directly offensive comments. Similar to, but not quite the same as an Internet troll[3]
FMCDH - From My Cold Dead Hands
FOAD - ~censored~ off and die
FOAF - Friend of a friend
FTL - For the loss
FTW - For the win
FU - ~censored~ you
FUBAR - ~censored~ up beyond all recognition / repair (from military slang; pronounced "foo-bar")
FUD - Fear, Uncertainty and Doubt (the purposeful spread of misinformation)
FWIW - For what it's worth
FYI - For your information


GBTW - Get back to work
GF - Great/good fight/girlfriend
GFU - Good for you
GFY - Go ~censored~ yourself
GG - Good game, used at or near the conclusion of a gaming match
GJ - Good job, often used in online gaming when a teammate performs an act benefitting his team, such as killing an opponent or enabling that kill
GMTA - Great minds think alike
Godwin's Law - Dictates that the longer a thread, the more likely someone will post a comparison involving Nazis or Hitler
Gratz - Congratulations
GTFO - Get the ~censored~ out
GTG or G2G - 'Got to go' or 'Good to go'
GR -Good Race
GR8 - Great


HAND - Have A Nice Day
Handle - Name used in online chat, (AKA nick(name), alias, screen/user name)
HF - Have fun
Haxor or H4x0r (1337) - Hacker
Hit - A request made to the web server, (noun) the results of an internet search, (verb) loading a Web page. Hits are not equivalent to visitors of a webpage.
Home page - The website's introduction page, starting point, and guide. The technical term is "index"
Hot list - A collection of publicly available URLs (World Wide Web site addresses), sometimes available as text files.
HTH - Hope this / that helps
H8 - Hate


IANAL - I am not a lawyer
IBTL - In before the lock
IDC - I don't care
IDK - I don't know
IIRC - If I recall / remember correctly
IIUC - If I understand correctly
IMO/IMHO/IMNSHO/IMAO - In my (humble / honest / not so humble / arrogant) opinion
Information superhighway - The Internet (AKA: I-way, infobahn)
IONO - I don't know
IOW - In other words
IRC - Internet Relay Chat
IRL - In real life
ITYM - I Think You Mean
IWSN - I want sex now
IYKWIM - If you know what I mean


k or kk - OK
KISS - Keep it simple stupid.
KS(ing) - Kill-Steal(ing)
KOS - Kill on sight
KTHX - OK, thanks
KTHXBAI or KTHXBYE - OK, thanks, goodbye, used either to cut short a conversation or to express displeasure with being cut short


L2P - Learn to play; an admonishment to MMORPG players who are incompetent and/or whine
L8R - Later, L8R also sometimes abbreviated as L8ER is commonly used in chat rooms and other text based communications as a way of saying good bye.
Lag - Slang term for slow Internet speeds or high Internet latency; Lag is sometimes due to a server problem, but more frequently due to the connection between client and server. A slow or intermittent connection may often be referred to as laggy
Lamer - A know-nothing, one who is lame.
Leet - Often spelled as l33t or 1337 in ASCII form. It originally meant elite
LFG - Looking for group
LFM - Looking for more
LM(F)AO - Laughing my (frigging) ass off
LMIRL - Let's meet in real life.
LMK - Let me know
LOL - Laughing out loud, laugh out loud
LTNS - Long time no see
Lurker - Someone who frequents a Usenet group without participating in discussions


NE1 - "Anyone"
NFI - "No ~censored~ Idea"
Newbie, noob, or n00b - An inexperienced user of a system or game,or an annoying person.
NIFOC - Naked In Front Of Computer
NM - (Sometimes written N/M) Not much, Never mind or no message, used on message boards or in e-mails to indicate that everything is already said in the subject line.
NP - No problem
NSFW - Not safe for work. Warning about content that may get the viewer in trouble with his employer or co-workers.
NVM, NVMD, or nm - Nevermind, not much


QFT - Quoted for truth. Used on internet message boards to show agreement from a previous message


TANSTAAFL - There ain't no such thing as a free lunch
TBF - Time between failures
TBH - To be honest
TG - That's great
TGIF - Thank god it's Friday
TH(N)X, TNX or TX - Thanks
TIA - Thanks in advance
TINC - There Is No Cabal, a term discouraging conspiracy theories
TMI - Too much information
TOS - Terms of service
TTBOMK - To the best of my knowledge
TTFN - Ta ta for now
TTT - To the top, used in forums to bump a thread
TTYL - Talk to you later (also spelled TTUL, T2UL or T2YL)
TTYTT - To Tell You The Truth
Tweedler - One who has deep love for all computer related technology and gadgets
TWIMC - To Whom It May Concern
TY - Thank you
TYT - Take your time
TYVM - Thank you very much


U - You
UTFSE - Use the ~censored~ search engine

YARLY - Yeah Really
YHBT - You have been trolled
YKW - You know what?
YMMV - Your mileage may vary.
YTMND - You're The Man Now, Dog
YW - You're welcome.
YOYO- You're On Your Own.


(src: Credit to original author of this listing)