By Navin February 01, 2009
Between 6:30 a.m. PST and 7:25 am PST(9:30 a.m. EST and 10:25 a.m. EST) this morning, Google listed almost all internet sites as harmful sites. Every Googler who searched during that time frame were greeted with the awkwardly insane message 'This Site may harm your computer'. 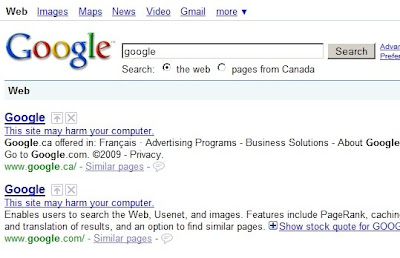 Even Google's own search portal was marked as culprit, who's to blame, nobody..error happens
Google in tie with stopbadware.org has been blacklisting all those sites which contained malicious scripts as harmful malicious sites warning Googlers for potential threats. Stopbadware.org has been listing all the sites as harmful which they later on would send it to Google to update it's search databases, But, something went wrong as what Google mentioned as the 'human error'on their side where the URL of '/' was mistakenly checked in as a value to the file(malicious) and '/' expanded to all URLS and they mixed up all genuine as well as threat sites as baddies.

I was oblivious(may be millions of others users in different time zone might have not known what had happened) of that event as Google solved the problem pronto but later I noticed that Google and Stopbadware team had some serious blaming going to each other from what I read on their sites about the issue. It appeared that Google at first put all the blames towards stopbadware of which Stopbadware contradicted rationally. The recent post of Google seemed that it took all the blame for the error.

Whatever had happened, it caused panic all over and put Google's credential at risk. This momentary glitch almost crashed stopbadware.org servers(which they termed as DenialOfService) because of overwhelming influx of guided visitors prompted by the link on the warning message which clearly stated "..you can learn more about harmful web content and how to protect your computer at stopbadware.org.."

Sometimes, we make error. I still remember, that I read during my schoolhood ' to err is human nature'. At this time, cursing Google for this minor glitch is a total misconduct forgetting what Google has given us till date as free service.