By Navin April 12, 2009
Solid State Disks, which uses the same technology like flash-based storage as USB drives, are now being used for laptops and emulates Hard disk drive. Just like an ordinary flash memory card, these Solid State Disks(SSD) are extremely fast in read/write operations, shock-proof and completely silent(it doesn't have to bother with any mechanical arm's to read/write like on today's harddrives that we've in our computers.) All these benefits and being new kid in the technology block comes with a price which makes it extremely expensive for now. Right now, personally I've no choice other than fantasizing about this thing to be in my system one day. ;)


Recently a company known as Super Talent has announced 512 GB SSD for sale, the first massive storage compacted so far into small SSDs. And, this 512 GB SSD is priced at $1500, which is almost $3/GB as compared to 18 cents/GB in today's ubiquitous platter-based harddrives. 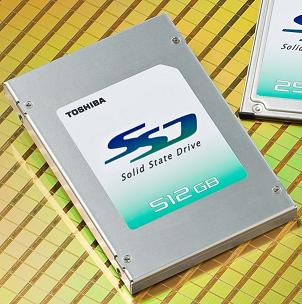 And, another company OCZ has promised 4 Terabytes SSDs with a read performance of up to 600MB/ps by the end of this year 2009 which would totally break free all the limitations of today's harddrives.

SSD's are the hard drives of future for sure.