By Navin April 29, 2009
All of a sudden, mighty Blu-ray started to look petty when I came to know that 500 GB optical media is due pretty soon.

Just like any other hype, the media junkies are calling it 500GB 'DVD' but officially it's manufacturers(GE's Holographic Storage) have admitted that this optical media is based onto slightly different technology of read/write than what we had and have today in the market of optical media storage. It's micro-holographic disc, it's different than the rest of it's brother technology in a sense data can be stored/retrieved in three dimension. To get it even in a simpler term, laser light will hit on both sides of the disc. Traditional CD/DVDs have label coating on one side and the other side is with magnetic layers to store/retrieve date, not with this micro-holographic disc. 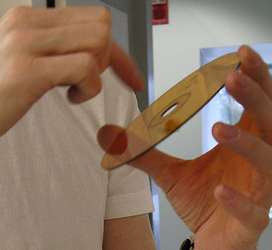 As learned, this technology is developed to store huge chunks of information most suitably for archival industry but pretty sure, it could be heading to home consumers too.

Brian Lawrence, who leads GE's Holographic Storage said on the GE Research blog: "Very recently, the team at GE has made dramatic improvements in the materials enabling significant increases in the amount of light that can be reflected by the holograms." (src:bbc)
Brian Lawrence of GE's holographic project, explains how his team designed a system that stores 500GB on a single DVD.

GE(General Electric) Holographic Storage is looking forward to tie with hardware manufacturers to produce players which could read/write not only their upcoming micro-holographics disc but also previous DVD/Blu-rays etc making it completely backward compatible since it's based on same laser technology.