By Navin April 10, 2009
This morning as I headed to my work, I tried to call my boss on the way. Just as I pushed the dial button, the strange beep sound reverberated. I tried 2-3 times but it just wouldn't connect. I didn't pay much attention then.

When I reached the office, my boss asked if my cell phone was working and I said "YES". Hers was not working. I remembered why my phone was not ringing her phone before. She was just wondering why her phone was not working. As I found myself busy with my day work later, I started to see grumpy customers, mostly mumbling about some communication outage, fiber optics cut off underground blah blah.. That made no sense to me. Wait a minute, I checked back to my cell phone and damn.. that had no signal at all either. My boss has got Verizon and mine is AT&T. None were working. 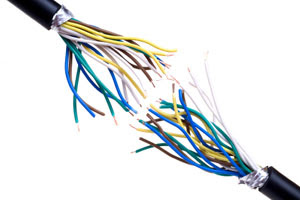 As more customers came in, I found the growing number of victims from no-communication samsara, all complaining and then speculating at their own. One thing was of big concern, inability to dial 911. These people were more concerned about 911 and other important security calls not working. My coworker Mary was more focused on criminal activities and damages that it could bring.

Some showed up and said like it could be the rival companies' deed, some even said, the companies' own crew member sabotaged because they were fired, and I remember that old guy who mocked at the situation that was an act of terrorism. Thank God, Comcast rules, our financial firm totally depends on Internet and Comcast didn't let us down. We worked whole day and people were flabbergasted to find out that our's was running when Wells Fargo,Comerica,and so many other banks were closed just because they had no internet and telephone connection. This underground fiber-optics glitch halted many day to day financial activities here in Santa Cruz. Pay phone were out of service, ATMs were totally useless. Debit/Credit card were rendered totally useless for a day. Many suffered because they don't use CASH but debit/credit cards.

Before I left my workplace, I checked news online and found headlines like 'Telephone,Internet Outage hit Silicon Valley'. What I thought was a small incident became Nation's headlines within hours. These people are still not sure about the solid cause but they've concluded that some experienced hooligans might have caused this terror who cut off all the major fiber-optic cables underground on purpose. But why?? nobody knows yet. 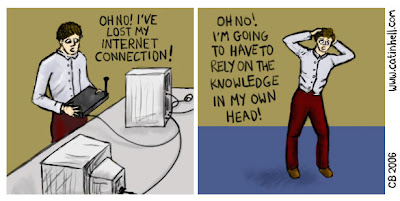 This incident has given us a glimpse of the catastrophe that today's technology could bring upon failure, just like a victim gets sudden painful left-hand aching before heart attack. Are we depending too much into technology? What if tomorrow this situation prevailed for months? Just imagining is fearful.

This is nothing serious, we just had this communication outage. What if there is power outage(go and search on plasma storm)? That would be even more dreadful than this.

dai said…
similar thing happened to me in NYC: