How was April Fools Day?

By Navin April 03, 2009
I didn't know it was April Fool's day yesterday untill my online Vendor pulled a prank on me. As usual, I was checking emails late in the evening, one mail with rock-solid steal-deal was almost irresistible. 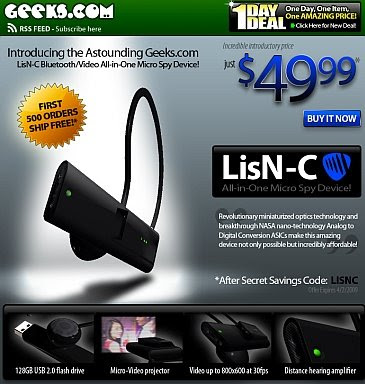 They flaunted it's only $49.99 for first $500 orders and I knew they have more than 5,000 readers watching the same Ad. Trying to jump on the race, I clicked their Newsletter link and GOSH..
This is the page where I ended up.

April Fool.. phew.. I almost took my Credit Card out, and was about to get this too-good-to-be-true stuff. I was imagining this thing if existed could've cost at minimum for more than 1,000 bucks but alas, it's just somebody's fantasy at work played on April's 1st. I made that Mr. Bean's Pissed off face once I realised it's not real and moment later, I burst out with laugh.

Later I found World played a big prank to everybody on this particular day. There are so naive bloggers out there that they actually thought it's real and wrote post about them thinking it's true. Sorry for them.

So, the followings are the April Fool's day list(assorted) which I think should be mentioned on my blog:


3. Warner Bros bought ThePirateBay.com. If you've read my blogpost previously where I wrote about the Pirate Bay folks being dragged into the court for illegal file sharing.

7. And, of course the Conficker Worm's Global Attack on world-wide computing. Many news media sensationalized this Internet Worm Issue more than anything which was unnecessary. Nothing happened. Just an April Fool's prank. I've played hide-n-seek with this Conficker Worm in my Sandbox, if you want to get over of this worm, read my previous post on "How to Remove Conficker Worm".