By Navin April 28, 2009
Marked by the unprecedented sale of small-sized laptops even during this recession, this age we're living in is Netbook age in one sense. I own Acer Aspire One, others have their own. I've skinned my netbook to look like this. 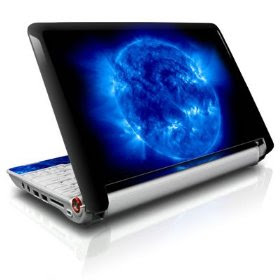 I'm an avid lover of blue color, everything blue is my first priority, hence my blue themed earth aura sticker on my netbook has collected many's admiration(oh WOW!! ,| coool | awesomeee | what's that). I don't carry any arrogant pride for having netbook although I sometimes wish if it were as powerful as today's desktop. But, looking at it's size and comparing superspeed Pentium computer few years back, this netbook is a charming kid. I run windows on it.

There was a huge buzz about Android(linux flavor OS) and there still is. Amidst the noise, one chinese company Guangzhou Skytone has reported that it's going to release this Android based netbook within 3 months of time at merely $250. One thing unique about this netbook is ARM processor. Unlike Atom processors used in today's netbook, ARM processor is even more energy efficient than ATOM and is going to make it's debut on this netbook for first time. ARM processors are massively used in Cellphones and other small portable devices. This netbook according to it's manufacturers weight just 1.5 lb and they've named it Alpha 680(bit cheesy name for netbook).

Netbooks are next generation computing choice of people and it's skyrocketing sale has forced regular-sized laptops to drop it's price ridiculously.