By Navin May 12, 2009
What is Kindle? Just ask anybody and if they've any clue, they'll tell you it's alternative to reading papers. It's a portable electronic book reader. The prominent and selling point of this device is the anti-glare technology that Amazon's incorporated into it. It just feels like an ordinary paper which you could read even on direct sunlight. Most of today's TFT LCDs are cursed by the glaring reflection under sun and it's almost impossible to read things on those Laptops or anything with those screens when put under direct light. Amazon claimed it's not the case with Kindle and Kindle's sale skyrocketed. 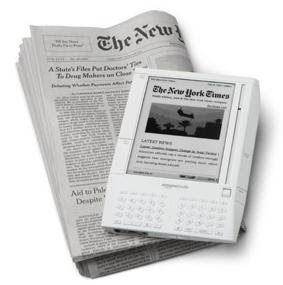 Now, this week Amazon has come up with new Kindle 3, sorry KINDLE DX, a promising nice slap to Kindle 2 buyers, who must have felt cheated/robbed(may be it's my own fantasy but believe me, I've met few people who have felt so aggravated). Kindle DX would be sold at outrageously high price of over $480 as a pre-order rate. This time also Amazon claimed it's far better than it's previous brothers. The screen size is now regular A4 size, in most cases no need to scroll up and down, even better battery life, wireless connectivity, over 250,000 downloadable books and blah blah blah.

One thing I don't understand, why they had to come up with this Kindle DX just after few months they released 'Kindle 2'. Who knows what would be there after 3 months? Kindle FX?? Kindle ZX?? who knows.

No matter, how much price you pay for it, it still cannot render color. That means any graphics you see on the screen will be grayscale. All of you comic readers, who wants to read on it must be disheartened by this fact but who knows, Amazon might add it after 2 months and release next version of Kindle.

It's all money business and for every feature which they could've added at a time, they'll create episodes on every feature and they'll shell out more money out of it. Mark my word, when they release the color-enabled version of Kindle, you'll be robbed. I think this is the way of doing business for these companies but I don't think this is right.

Amazon, lower your Kindle's outrageous price eventually. Students are readers, target them, their pocket and make it easily affordable, don't make it class. Else you'll be next Apple Inc and many bloggers like me would be writing against your business model.

Anonymous said…
"Most of today's TFT LCDs are cursed by the glaring reflection under sun and it's almost impossible to read things on those Laptops or anything with those screens when put under direct light."

Your problem is with glossy LCD screens. Before the industry went nuts with those glossy screens, notebook computers used to come with matte displays. Those are better suited for outdoor reading.
August 27, 2009 at 11:39 AM