By Navin June 29, 2009
It's considered that Dell and HP are the big players in the computer business. Who would've thought Acer would surpass them? Taiwan based, PC vendor has become the world's second largest PC manufacturer. 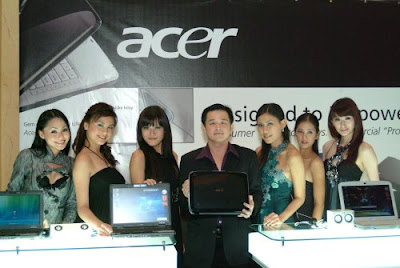 Many people here in Western are surprised with the news. How come a non-US manufacturer top the chart exceeding the sales amazingly in USA?

Statistically, big names like Dell and HP have suffered huge percentage of loss in yester years as compared to Acer's. The sole reason of this loss being their firm attitude selling high-priced computer system. Their oblivious attitude towards growing economic crisis has sunken their PC sales whereas Acer acted smartly and jumped into production of low cost, yet fancy and extremely portable netbooks. With their skyrocketing sales of Netbook, other vendors couldn't resist the urge and hurdled into the race. It seems Acer is still ahead of all according to their spiking sales chart reports. As a matter of fact, it's not only netbook, overall their products are cheap and best.

I'm happy not because I've 22" Acer widescreen Monitor or that I've envious 8" Acer Netbook, but to find out that finally Acer got it's recognition it deserved.

It's kindda obnoxious to see these companies still adamant about selling their so-called high-end PC's in thousands of dollars. Whereas Acer dealt with cheap & best list of manufacturers to produce nearly same result outputting systems.

Whatever it's all business model, it's dynamic and the only player wins who evolves with the time and demand.

To be true, Acer's products are awesome.