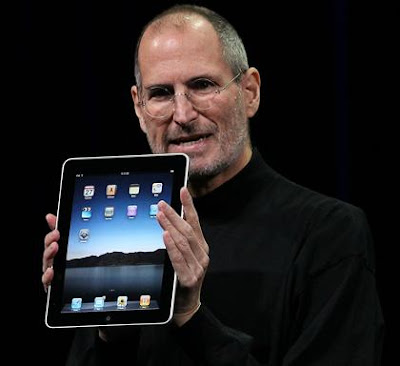 As soon as I watched Steve Job's keynote on it's slate PC called Apple iPad, all those TV pundits started their silly arguments. Those female gossips compared the name to their tampons. That was the idiotic comment I've ever heard in long time. The thing is not yet out in the market and those so-called Media anchors were giving out ideas as if they've already owned it. That's why I switch the channel whenever there is any kind of debates run by these idiots who knows nothing but run insanely crazy idiotic debate shows. They speak 20% truth and 80% of their remarks are all based on their own imaginations,guessworks and rumors. That's why I urge not to fall for comments of any kind made by these media people.

Despite being an ardent Apple hater, I liked the idea of Apple iPad. Most importantly, the price. It's gonna be available for mere $500. Now, look at those names Apple has set for before. As rumored, it's not i-Slate or some other stupid names spread on the internet. Like i-Phone,i-Pod and it's now i-Pad, they are continuing their branding. That's it. If you think its feminine, you are one of those gossip I hate the most. Just because they affixed 'Pad' after 'i' doesn't mean it's that 'PAD' ladies wear. Mouse Pad, Touch Pad,... we've used 'Pad's before.

I watched Job's keynote, just at the end, he mistook and actually said i-pad as i-Pod. But given his current health issues, I ignored and didn't chuckle out loud.

Now, what is iPad:

- It's bigger version of iPhone/iPod.(I always wanted iPhone to be bigger)
- It's a slate PC ( Go and watch AVATAR, You'll see Slate PCs there)
- It's a portable media player (I always dreamed of owning Archos but considering their pathetic pricing policy to make money out of consumer's pocket, I ditched the idea)
- It's an ebook reader (definitely, the colorful display that I missed on Kindle).
- It's Ultra portable weighing just 1.5 pounds and half-inch thick.
- It's also a gaming device. Can play games.
- Photo viewing was way fun
- Whopping 10 hours battery life at one charge.

These above listings are based on Steve Job's keynotes.

And what iPad is lacking:
- It's not multi-tasking. Run one stuff at a time. (Job claimed it's better than netbook.. ahem)
- It doesn't have Camera (Most netbooks have)
- It is not a phone ( I use netbooks to make calls using skype. They might be on iPad too, but still)
- It doesn't have native flash support. (Job was demoing iPad how news can be read and the news site had this Flash video, which iPad couldn't play but placed blunder box when you don't have Flash support in your PC too)
- No extra SD means No extra storage. Just use what they sell. Max is 64 GB. Is it fair??( My netbook has over 160 GB)
- No USB port. (now this is the major drawback of this thing, world is going USB and Apple missed the train.)
- Extremely fragile, drop it and you turn it into crap, boommm $500's gone.

Steve Job, your iPad is great looking portable device but you can't point us how inferior our netbooks are. Your iPad has a lot to take care of before pointing at netbook's problems.

The only two things that make iPad look like iPad is it's touchscreen and battery life. Rest are inferior to Netbook PC. I can do all those stuffs on my netbook way better that what you showed on your keynote presentation and my netbook has well-served it's purpose till date.

All of you Apple Fans, if you are planning to get an iPad, you guys need to seriously check the following video too.


This is what a slate PC should be and coming this year. This is what I call the revolutionary technology, an extra-ordinary addition in the history of computing, a hybrid computer running both linux and windows world together. One can switch to both OS in 1 sec. This is what I'm waiting for.

Now, hitler is so mad about iPad, he's yelling at iPad. Check this video below:

Ashish said…
I heard it was a large iTouch. It cannot even be said as a large iPhone because iPhone can be actually used to make calls lol.
January 29, 2010 at 9:59 PM

lexlimbu said…
hmm, iPad looks quite ugly - i guess it depends on ones choice. the worst thing is that you know after few months Apple will come out with some new'er better version. thats a big pisstake.
March 1, 2010 at 3:54 AM

Digital product photography said…
This article is very interesting.Thanks for the post
July 27, 2010 at 10:03 AM