By Navin April 08, 2010
This post is very similar to my last post but with added stuff. iPad is going to be an over-hyped marketing bluff. I don't like iPad because:

1. It's not revolutionary. It doesn't even use real OS. It uses iPhone's mobile OS. It's not multitasking. It's just click and touch applet stuff. And fools are falling for it thinking it's light year ahead stuff. They are brainwashed if they think it's revolutionary. 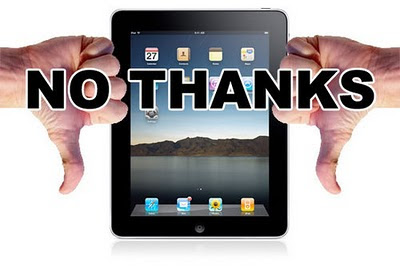 2. It uses slow processor speed. 1 Ghz, common my tiny phone has 600 Mhz. They just tricked their apps to run optimized under that speed.

3. It doesn't have USB support. Longtime ago, they boycotted support for floppy and with ever-changing technology, we don't need ancient floppy loaded anymore. But what the hell were they thinking when they took out USB connectivity? Do they still think they are trendsetter? USB 3 is knocking on the door. World is going USB. iPad????

4. No Flash Support. Crossed the limit of idiocy. Web page viewing is mess experience and they are flaunting it's the best device for Web experience.

5. Multimedia sucks. Not even 16:9 but 4:3. Watch movie on it and you'll see the black box up and down while movie playing lamely in between. This sucks bigtime. Waste of screen space.

6. Gaming controls are big turnoff. It's friggin apps are turning human into maniac. I saw my brother faking a beer drink on his iPod and I felt then Apple is turning sensible human into mentally retarded people. It's games suck bigtime and even if you could play street fighter on it, you'll still miss your controller. Forget about the combos move. It's just unrealistic and senseless.

7. Boring and cheesy apps. That's for sure. Most of them are Mindless stuffs for mindless people.

8. It's not the thinnest device yet, pain in ass after long use and I'll laugh on it's claim after 2 years. They don't know the meaning of 'Thin' yet. Definition of 'Thinness' will be set in coming years when new product will launch.

9. It could give you arthritis or carpal tunnel syndrome. Forget about writing a long journal or email on it OR you are prone to diseases. Be ready to spend on that too.

10. Storage option is blocked, no upgrade. Buy it or ditch it.

11. No camera, not for social network bugs. Forget about the dream you were having to video chat with your buddies on the go.

12. Useless for business purposes. No camera, No video conferencing and awkward keyboard layout. Will jeopardize your QWERTY typing skill.

13. Apps are expensive, don't fall for it's low price tag. It's the same business policy.. just like buying dead cheap printer and spending dead expensive ink refills. Besides, Apps are mindless as I said before.

14. Apple released 300,000 iPads sold data, which is truth bending stuff geared toward getting influx of more fools.. I feel sorry for those stupid who waited for it midnight and got it next day.

Now, they are gonna come up with next version. If you care, see what they did with iPhone. They'll charge you more and goofy people will spend even more money on it. Most probably, they might fill in all the things I mentioned here on their next version device at the cost of jacked up price. I'm waiting for that to see.

And, I was astonished to see comments of some people who have owned everything Apple spat on the market till this date.

My sympathy to all of them who owned it and now regretting. Go eBay and set your trap on another fool looking for it.

Unknown said…
yes navin bro people are crazy with apple. They'll b irritated after using it a month.
July 5, 2010 at 6:53 PM