By Navin August 21, 2010
Whatever we've seen on TVs or Movies about manned Mar's landing are far from reality. May be in a distant future, we could be seen mars landing. But in the present context, we are so much indulged into selfish wars, it's almost impossible to dream about those things. Sometimes I wonder we human will be the reason of our own extinction from this planet Earth.
Anyway, there is an experiment going on which is called Mars-500. If you've not read/heard about it, then it's something about getting ready for Mar's landing. This ground-based experiment is being observed at the Russian Academy of Sciences' Institute of Biomeidcal Problems in Moscow,Russia. This is the longest stage of the experiment intended to simulate a complete 520-day mission to Mars. It began on June 3,2010. It includes a series of experiments simulating these or those aspects of an interplanetary manned flight. The main part is a series of experiments on long-term isolation of the crew in conditions of the specially built ground-based experiment facility. 6 Volunteers from different nationalities have taken part in this experiment. 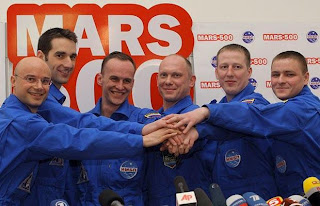 If you want to check their updates, here is their blog http://imbp-mars500.livejournal.com/

Till now, there is no manned landing on Mars. And, 2/3 of the launches were failure. One guided robot Spirit is still stuck on the surface of Mars. A lot of things in Mars have puzzled our scientists and they still don't know the reasons why those spacecrafts launched from Earth stopped working just when they're ready to enter and land on Mar's atmosphere.

Scientists believe there was once life in Mars. But we just don't know how to get there to do more researches. If we were to launch manned spacecraft to the Mars, it'd take roughly six months of time to reach Mars based on current rocket speed. And, things would start from there if it is successful.

Back to reality, this Mars-500 experiment is just the beginning of that manned Mars landing project.

Also, I found one interesting fact on this little boy called 'Boriska' from somewhere in Russia. He claims to be from Mars. You need to see the whole interview before I elaborate any more.
Here is the video(below):

Here is a well written article on Mar's landing if you are further interested.