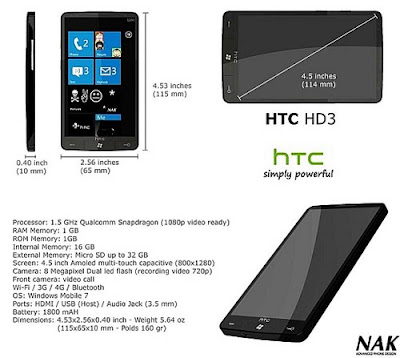 Regardless, Microsoft’s latest attempt at a mobile operating system with Windows Phone 7 is quickly approaching with hardware manufacturers everywhere gearing up their own offerings. Seeing how the HTC HD2 was such a successful device, speculation regarding a Windows Phone 7 powered HTC HD3 has become the general consensus.

Today, a supposed spec sheet for the HD3 has leaked out giving us a look at what seems to be hardware components that are too good to be true. As you can see from the above pictured spec sheet, the HD3 is said to feature a 4.5-inch screen, a 1.5GHz processor, 1GB of RAM, an 8 megapixel camera and more.

We’ll have to wait until someone officially involved with the matter comes forth to speak more.

casino en ligne said…
great site really informative i learned a lot great stuff keep it up
September 9, 2010 at 12:02 AM