By Navin October 12, 2010
Today on Monday morning in New York , Microsoft unveiled a new mobile platform Windows Phone 7 (WP7). Microsoft CEO Steve Ballmer said nine different mobile phones will come equipped with Windows Phone 7 this coming November,2010. Some of them are HTC,LG,Samsung etc. 60 mobile operators around world will carry Windows phone 7 on their devices. So guys you've choices and you can go for the service of your choice. 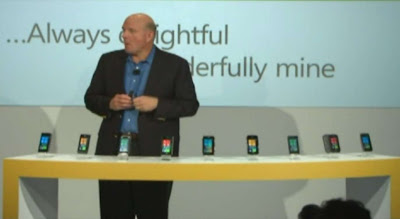 During the press conference, Ballmer kept emphasizing on it's usability. They know what they are doing and where they are heading towards. There are currently mighty iPhone and colossal Android reigning the market to which Microsoft threw something out of it's basket called Windows Phone 7. Phones interface might be little quirky for those used to with conventional UI of the phones. But once they kept showcasing the phone, I started to like it. It's all in front of your eye and don't need to shift up that sliding down glasses to use your phone. Just touch, scroll, slide and tap. Taking photos/videos with the camera was surprisingly fast. I don't want to go in detail. But one thing is sure, everything about this mobile phone is 'extremely fast and responsive'. You guys check out the 'Press Conference LIVE recorded' below