NASA to setup a defense mechanism against asteroid hazards

By Navin October 22, 2010
Few years ago, I heard news about buying land on the moon. I simply ignored, thought it as some sort of mockery. People were bidding for that. Since past few days, I'm reading news about plans to set up lunar base on the moon. Actually, NASA has been planning this for long and working day and night for it.  They plan to surpass the Apollo missions by establishing a base on the moon that could lead to a permanent human presence on the lunar surface. I was amused to imagine that buying plots on moon's surface is not despicable at all when moon base becomes reality. 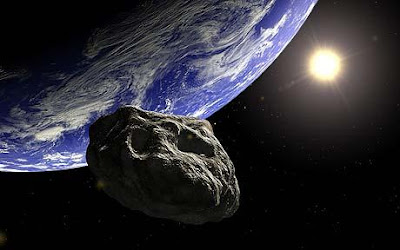 Recent developing news suggest that there is at least 1 billion gallon of water on moon's surface discovered just from last year's moon bombing LCROSS experiment. This is just from one crater. What does it mean for average guy like me? It means spacecraft wouldn't have to bring water from Earth. It'll cut the expenses and load on spacecrafts. If astronauts land near ice deposits,and say they set up a base, they could use the ice for their survival. Water which is essential for human survival could be broken down into hydrogen and oxygen. Hydrogen could be used for fueling and oxygen for breathing. Thereafter, inter-planetary mission would take a step ahead. It's really important for future space exploration.

Also,another News surfaced yesterday suggest that NASA is establishing a Planetary Defense Coordination Office to lead national and international efforts in protecting Earth against impacts by asteroids and comets. This means we're entering the era of space wars. I'm not talking about age-old Atari space war game. I could imagine what does this mean. We, human, would be able to deflect any asteroid hazards. They've not stated how they are going to do this but definitely, this is something I've long been waiting for. I was always thinking what would it be like to destroy an asteroids. At least, they stepped forward and formulating plans for this preventive measures against cosmic hazards.

I'm not sure if this is just words or going to be a reality. If it becomes reality, I may not be living that longer to see all this, but I'm happy for our kind, human. One day, united we shall explore the depth of dark space.